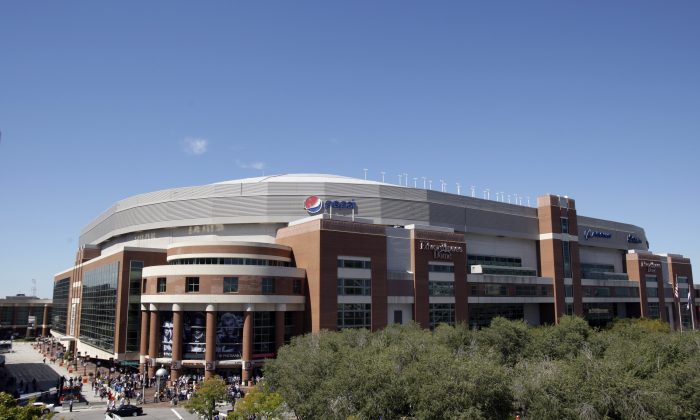 The Edward James Dome, which the St. Louis Rams may move from after this season, according to the latest rumors. AP Photo/Jeff Roberson)
NFL

St. Louis Rams Rumors: Relocation to Los Angeles is a Done Deal, Will be Announced After Super Bowl

The St. Louis Rams have already made the decision to relocate to Los Angeles, and will make the official announcement after the Super Bowl, according to a new report.

“There’s a strong belief, people that are in–that I believe are in the know–multiple people, have told me that the decision has already been made and that the team is moving,” one of the hosts of 101 ESPN said in a recent show.

“Somebody told you that, really?” sharply questioned another.

Kroenke stoked speculation in January by buying a 60-acre tract of land in Inglewood, California.

“The land is located between the recently renovated Forum and the Hollywood Park racetrack, which was shut down in December, and could potentially serve as the home of a future NFL stadium,” ESPN said.

“Since the Raiders and Rams left Southern California after the 1994 season, Los Angeles has been subjected to enough meaningless artist renderings to fill a museum and more empty promises to encompass two decades worth of failed campaign speeches. There is, however, a big difference if Kroenke truly does have an interest in moving the Rams out of St. Louis and back to Los Angeles. He owns the Rams and now owns enough land in Los Angeles to build a stadium.”

“Every indication that you get, or everything that is not said by Stan Kroenke would lead you to believe that he wants to build a stadium and have a team there,” one of the ESPN Radio hosts said this week.

“This is a guy that lives in L.A., and tried to buy the Dodgers.”

“Whoever builds in L.A., can’t lose money,” one of the hosts noted, saying that the stadium will likely be “opulent.”

Besides the Rams, the Oakland Raiders are thought to be the most likely team to move to Los Angeles.

“If they can get the six month extension, convince Mark Davis to sell and get him out of the picture, the Raiders might be a logical choice to put into that edifice near L.A. live,” one of the hosts noted.

“If that’s the stadium they have, then Stan Kronke will probably not be interested in moving there.”

CBS Sports reported recently that NFL officials are trying to have the Raiders sold, a sale that could generate $2 billion or more.

“Selling the team remains the most likely path for a move to Los Angeles,” it said.

“The NFL will be very careful about who gets that Los Angeles market, and Raiders owner Mark Davis has limitations in real estate, marketing and overall business expertise. Convincing Davis to take a few billion to sell the team to one of the league’s short-list of owners-in-waiting — a list headlined by Larry Ellison, sources said — would be one way to fast-track getting to that market.”

The ESPN Radio hosts noted that, AEG, the company behind Farmers Field, a proposed $1.5 billion football stadium, is seeking a 6-month extension to its existing agreement with the city for the project.

“AEG requested an extension to allow for additional time to pursue an NFL team and also pursue and develop an alternative development plan,” it said, including a hotel. The plans were set to expire on October 18.

“We have resume discussions with the NFL, and while much remains to be done before this deal comes together, we remain committed to this project,” the company’s president was quoted as saying.

The earliest a team could relocate to Los Angeles would be January 2015.  The Rams moved to St. Louis from Los Angeles in 1994.

The team’s lease agreement with the Convention and Visitors Commission, which runs the Edward Jones Dome, expires at the end of this season, noted St. Louis Post-Dispatch columnist Bryan Burwell in September.

Burwell is among the crowd that believes the Rams need to move–in fact, St. Louis needs them to move.

“Is there a movement out there — or a smart local business or political leader — that can create a wide-sweeping regional plan that would prove to be a benefit to the entire region of greater St. Louis? And does anyone believe that a massive stadium and multipurpose real estate development surrounding it should be a part of that regional vision?” he said.