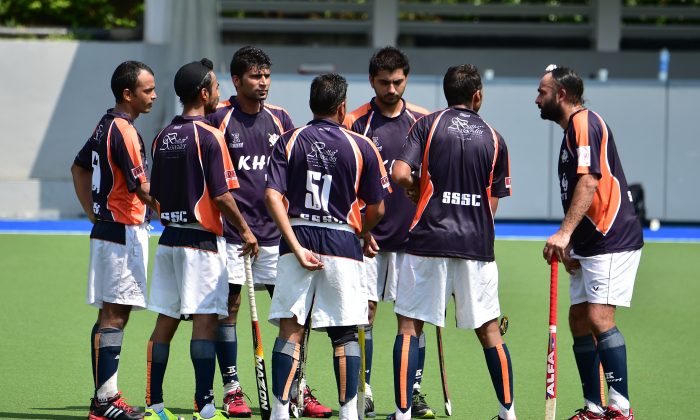 SSSC-A team members having a conference during their Week-2 match of the 2014-15 season. (Bill Cox)
Hong Kong

SSSC-A Win to Top the Standings

HONG KONG—Only 3-matches were played on Sunday Oct 19 in Hong Kong Hockey Association Premier Division. Hong Kong Cricket Club (HKCC) beat Kowloon Cricket Club (KCC) 1-0, Shaheen had their second win of the season (6-3) at the expense of KNS, Hong Kong Football Club-A (HKFC-A) won 5-3 against their HKFC-B side keeping A’s unbeaten record intact, but it was the match between Khalsa-A and SSSC-A that was the most significant.

SSSC-A playing without their club Captain, who according to Singh Sabha convenor may well be out for at least two months due to the broken arm he sustained in last week’s match, put up a strong performance against Khalsa-A at the King’s Park Hockey Ground.

Under the leadership of Vice Captain Navdeep Sharma, SSSC-A scored a 4-1 win over the illustrious Khalsa-A team. Khalsa Manager, Gurcharan Singh, told Epoch Times, “We have no regrets to lose this game as both teams played clean and constructive hockey as there was not a single warning card in the game. It was not our day as we hit the woodwork 4-times.”

Fixtures
A full set of fixture are scheduled for this coming Saturday Oct 25 (Women) and Sunday Oct 26 (Men).