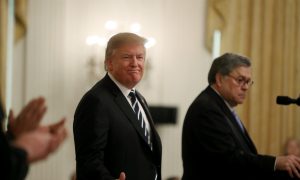 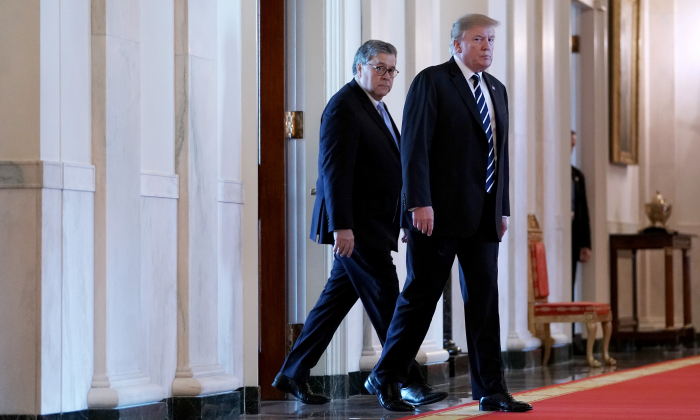 President Donald Trump and Attorney General William Barr arrive in the East Room of the White House in Washington on May 22, 2019. (Chip Somodevilla/Getty Images)
Trump Administration

The Justice Department’s inquiry into surveillance of the Trump 2016 presidential campaign has expanded to include the activities of foreign intelligence agencies, according to Assistant Attorney General Stephen Boyd.

Public knowledge about the involvement of foreign intelligence services in the spying operation that targeted the Trump campaign has so far been based on anonymously sourced media reports and unsubstantiated allegations.

In a June 10 letter (pdf) to Rep. Jerrold Nadler (D-N.Y.), Boyd formally confirmed, for the first time, that the Justice Department is reviewing if actions taken by these foreign intelligence services in connection to the Trump campaign were validly predicated and free of improper motives.

“The review is broad in scope and multifaceted and is intended to illuminate open questions regarding the activities of U.S. and foreign intelligence services as well as non-governmental organizations and individuals,” Boyd said in the letter.

Attorney General William Barr, who believes spying on Trump’s campaign occurred in 2016, assigned U.S. Attorney John Durham to handle the inquiry. Durham is collaborating with the domestic intelligence community and “certain foreign actors” to determine if the investigation of the Trump campaign “complied with applicable policies and laws,” Boyd said. President Donald Trump delegated to Barr the authority to declassify any document he needs as part of the investigation.

News reports based on anonymous sources have alleged, since 2017, that foreign intelligence services, particularly those from the UK, were collecting intelligence on the Trump campaign as early as 2015 and forwarding it to the United States.

The first formal hint that foreign intelligence agencies may have been involved in the spying operation came from the president. On Sept. 21, 2018, the president walked back his order to declassify a batch of documents related to spying on his campaign. In explaining the move, he wrote on Twitter that “key allies” had called him and asked not to release the documents. Trump’s reference to “key allies” suggested that the documents to be released may include damaging information on the governments involved.

The United States has a formal intelligence sharing relationship with four nations: the United Kingdom, Canada, Australia, and New Zealand. This intelligence alliance, named Five Eyes, allows for the sharing of a wide range of intelligence among the five governments. Documents released by former CIA employee Edward Snowden in 2013 showed that the governments used Five Eyes to spy on their own citizens using the intelligence they collected from one another as a way to circumvent strict prohibitions against domestic surveillance.

The counterintelligence investigation of the Trump campaign officially started on July 31, 2016, based on an allegation that Trump campaign associate George Papadopoulos told Australian diplomat Alexander Downer that Russia had damaging information on 2016 presidential candidate Hillary Clinton.

According to the final report by special counsel Robert Mueller, the United States received the tip about Papadopoulos from a “foreign government.”

How the tip about Papadopoulos made it to the FBI remains unclear. Then-House Intelligence Committee Chairman Devin Nunes (R-Calif.) said in April 2018 that no official intelligence passed through the Five Eyes channels that could be used to start an investigation into the Trump campaign.

Papadopoulos has long alleged that he was the target of an international spy operation to take down Trump.

Then-Central Intelligence Agency Director John Brennan shared foreign intelligence information on the Trump campaign with the FBI before the summer of 2016, according to his May 2017 testimony to the House Intelligence Committee.

“It was during the summertime but even previous. There [is] ongoing sharing of information with the bureau and so it was over the course of the year,” Brennan said.

During the same hearing, Brennan said that the information he passed to the FBI served as the basis of the bureau’s investigation of the Trump campaign. Brennan also conceded that while the intelligence he passed on raised his suspicions, it didn’t amount to evidence of collusion between the Trump campaign and Russia. The CIA deals specifically with intelligence gathered overseas primarily from human sources.

The FBI investigation eventually morphed into the special counsel investigation. Mueller concluded that probe in March, finding no evidence to establish that Trump or anyone on his campaign colluded with Russia.

The core of the verified public knowledge about spying on Trump’s campaign is anchored in the declassified Foreign Intelligence Surveillance Act (FISA) applications for a warrant to surveil former Trump campaign associate Carter Page.

While Page had quit the campaign by the time the FBI secured a warrant to spy on him, FISA warrants typically allow for retroactive data collection dating back up to five years. While the scope of the spying granted to the FBI in the Page warrant remains classified, it’s possible the bureau could access the communications of the entire Trump campaign as well as people who have interacted with the campaign, going back five years from October 2016 and lasting through October 2017.

In applying for the FISA warrant, top officials at the FBI and DOJ failed to disclose that the key evidence against Page was based on an unverified dossier compiled by a former foreign spy and paid for by the Hillary Clinton campaign and the Democratic National Committee.

The process for obtaining the Page FISA warrant was riddled with irregularities and is currently the subject of an investigation by Justice Department Inspector General Michael Horowitz. Barr had previously told Congress that Horowitz would deliver his report by June.

The deadline is likely to come and go, according to Rep. Mark Meadows (R-N.C.), who said the investigation is likely to go on longer because the inspector general has received additional information. Meadows made the comments the day before Boyd sent the letter revealing the involvement of foreign intelligence services.