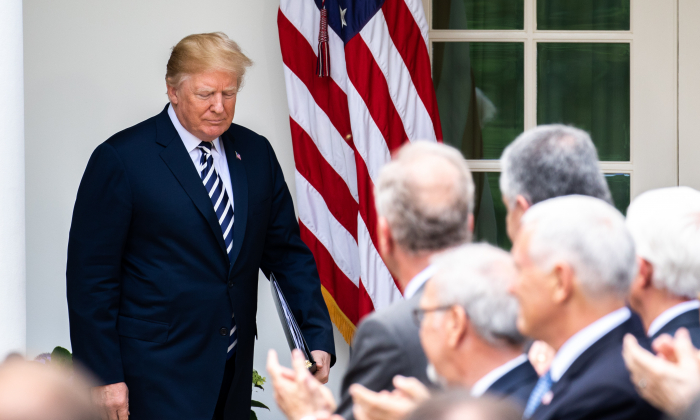 The Senate Homeland Security and Governmental Affairs Committee released 500 pages of documents and texts on June 4, the bulk of which consists of messages between Page and Strzok. One message, which was previously redacted, shows that FBI agents were working to recruit double agents as early as Dec. 28, 2015.

“You get all our oconus lures approved?” Strzok wrote to Page.

According to Chris Farrell, a former counterintelligence officer who ran double-agent operations for the U.S. Army, “oconus” stands for “outside the continental United States,” while “lures” refers to people used as bait to snag a potential double agent.

“In shorthand, these offensive counterintelligence operations, in plain English, it means a double-agent operation,” Farrell said in an interview cited by President Donald Trump on June 5. “And those lures, those are the persons that are dangled out in front in the hopes that interested parties would take a bite at them. Then the FBI would, of course, reel them in and run them against the Trump campaign.”

“Wow, Strzok-Page, the incompetent & corrupt FBI lovers, have texts referring to a counter-intelligence operation into the Trump Campaign dating way back to December, 2015,” Trump wrote. “SPYGATE is in full force! Is the Mainstream Media interested yet? Big stuff!”

Farrell emphasized that a “lure” ploy is not an investigation but an offensive operation. He also suggested that the FBI handled the operation overseas to evade legal requirements.

Early text messages between Page and Strzok suggest that Strzok was assigned to take over a project codenamed “special” on Aug. 21, 2015, two months after Trump announced his run for president. The nature of the project is still unclear, due to redactions in the text messages. The word “lures” was also previously redacted.

The timing of the “oconus lures” text message is problematic, since the FBI has long claimed that its operations against the Trump campaign began at the end of July 2016. If the agency’s work began earlier than that, lawmakers are likely to demand to know the rationale for the start of the operation. The FBI could land in hot water if it comes up emptyhanded.

“These are all violations of law. This is intelligence tradecraft to steer an election,” Farrell said. “There’s nothing more grave when it comes to abuse of our intelligence system.”

Last month, leaks from anonymous sources to the media revealed that the FBI had a spy infiltrate the Trump campaign. The leaks were detailed enough to pin down Stefan Halper, a professor at Cambridge University with ties to the CIA and MI6, as the operative. The professor received $1 million over four payments, starting in 2012, from a secretive Department of Defense think tank.

Halper met with at least three minor Trump campaign members in the runup to the 2016 election. Notable among these encounters is the meeting with volunteer Trump campaign adviser Carter Page in July 2016. Page had just returned from a trip to Russia and stayed in contact with Halper for months afterward.

Carter Page’s trip became the subject of unsubstantiated claims made in the Steele dossier—a piece of opposition research put together by former British intelligence agent Christopher Steele and paid for by the Clinton campaign and the Democratic National Committee. The dossier was the core of the warrant application for wiretapping Page and his associates several weeks before the presidential election.

Halper also met Trump volunteer campaign adviser George Papadopoulos in September 2016. Halper offered to fly Papadopoulos to London and give him $3,000 to write a policy paper on a gas field in the Mediterranean Sea. During the meeting, Halper asked, “George, you know about hacking the emails from Russia, right?” Papadopoulos told Halper he didn’t know anything about emails or Russian hacking.

Halper’s question about “the emails from Russia” is peculiar given that Papadopoulos would eventually be indicted for lying to the FBI about his communications with another professor, Joseph Mifsud, also about Russian emails.

Papadopoulos’s plea deal describes Mifsud as having “substantial connections to Russian government officials.” He’s even been called a Russian spy in the media, but a deep dive into his background exposes extensive ties to Western intelligence.

The potential use of double agents against the Trump campaign adds to an already damning picture of the actions a select group of Obama-administration cabinet-level officials took before and after the 2016 election.

The Justice Department is now investigating whether Obama administration officials spied on the Trump campaign for political reasons.

Late last month, Deputy Attorney General Rod Rosenstein ordered the Department of Justice watchdog, Inspector General Michael Horowitz, to expand the current probe of surveillance abuses against the Trump campaign to include allegations of infiltration and whether those involved engaged in these activities for “inappropriate purposes.”

Trump publically demanded an investigation on May 20.

Horowitz recently completed an exhaustive investigation into the handling of the probe into Hillary Clinton’s use of a private email server. The final report has not yet been made public. The watchdog’s work has already led to the firing of and criminal investigation referral for McCabe.