Spirit of Shen Yun Dancers is the Soul of Dance, Former Dancer Says 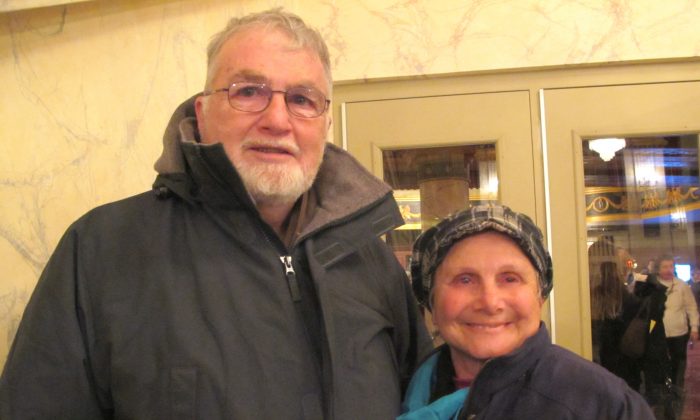 Larry and Carol O'Toole felt the positivity of Shen Yun dancers at the Palace Theater on Feb. 14, 2016. (Gary Du/Epoch Times)

WATERBURY, Conn.—”There are many good dancers, and what makes a great dancer is to integrate the spirit, the soul, and the body,” said Carol O’Toole, an acupuncturist and former professional ballerina. In Shen Yun Performing Arts, Mrs. O’Toole saw great dancers.

Mrs. O’Toole saw New York-based Shen Yun Performing Arts with her husband Larry at the Palace Theater on Valentine’s Day. She said, as a former dancer, she has loved seeing and being in performances and was appreciative for the opportunity to experience classical Chinese dance for the first time.

“I was saying to my husband I would’ve liked to bring my grandchildren,” she said.

The precision was perfectly on point, the timing coordinated to a T in sync with the animated backdrop. But technique is not enough to be a great dancer. “You have to be a great person first,” Mrs. O’Toole said.

The classical Chinese dances in Shen Yun tell stories from China’s rich and divinely inspired 5,000 years, including up to the present day. One story shows adherents of Falun Gong, a spiritual practice that upholds traditional Chinese values in China today. As the emcees explained, these values are truthfulness, compassion, and tolerance.

Mrs. O’Toole, being very interested in the way the dancers presented the unique movements, noticed the dancers must all practice this meditation as well.

“They bring the spirit of their meditation into the performance,” she said. “It affects the movement.”

That is what sets apart the good dancers from the great dancers. “The mind, the spirit, the soul,” and being able to “have that expression and be able to communicate that to the audience.”

She thought it was wonderful that the artists were able to do so as an entire group, and to affect the audience positively with these virtues.

“We affect each other. Dance, movement, of course, is a nonverbal way of communicating that spirit, and that loveliness, that heavenliness, and that joy. And I appreciate that,” she said.

Mr. O’Toole, who knew nothing of what to expect when he came to the performance, found himself just delighted. Many of the costumes incorporate long or flowing pieces of cloth, like the colorful skirts that seem to bloom when the dancers spin, or the long sleeves that twirl through the air, or the wave-like fans the dancers wield. Those created the most mesmerizing effects, he thought.

“Almost a dreamlike experience,” he said.