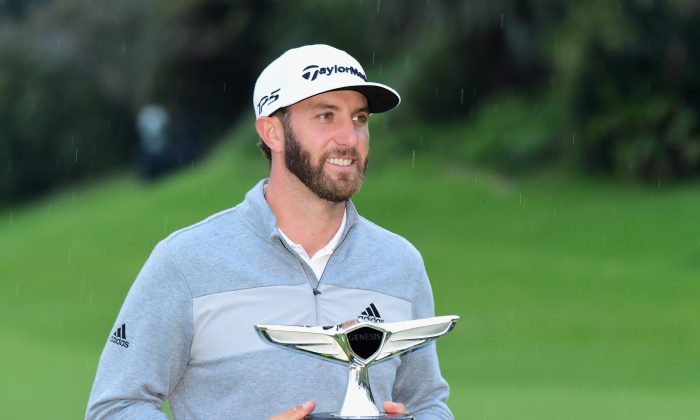 Dustin Johnson after the final round at the Genesis Open at Riviera Country Club on Feb. 19, 2017 in Pacific Palisades, California. (Harry How/Getty Images)
Golf

To fully understand an athlete it takes close examination of the low times they’ve experienced in order to better evaluate the highs they have attained.

Toward the end of the 2014 season Johnson opted for a “leave of absence” from the PGA Tour. Johnson cited personal issues and a need to get away from professional golf for several months.

The flip side of that storyline was very different. Johnson had failed different drug tests mandated by the PGA Tour and a likely suspension was in the works. By taking a pre-emptive move Johnson was able to provide his own “deniability” on that issue using the “personal issues” reason he provided.

Johnson and his team knew full well that the PGA Tour never publicizes any disciplinary action against its players. The self-imposed sabbatical for several months allowed the officials of the PGA Tour to effectively “sanction” Johnson without ever having to admit as much.

Johnson’s hiatus gave him time to reflect on the immense talent he had shown in small glimpses. Nonetheless, he was still a long way from being as dominant as many of his key supporters claimed he could be.

Tiger’s Torment: Is Retirement Near?

Getting himself in a better place required strong support and Dustin received that from his relationship with Wayne Gretzky, who just so happens to be his fiancé’s father.

Johnson returned to the golf world and again showed mush promise, winning a few events and being a constant presence. What could have been a major stumbling block for him actually became a moment, which Johnson used for extra motivation. The final hole of the 2015 U.S. Open at Chambers Bay had Johnson in prime position to win his first major event. Johnson struck two tremendous shots and was 12 feet away from a winning eagle.

At worst, a two-putt and he would be in a playoff with Jordan Spieth. Inexplicably, Dustin three-putted.

Go one month later to The Open Championship at The Old Course at St. Andrews and Johnson held the lead after two rounds. Two concluding 75s and his quest for The Claret Jug came to a screeching halt.

In both cases many other golfers might have had a mental train wreck of causing a derailment of their careers. Johnson soldiered onward.

His 2016 season was vintage stuff: three wins, including his first major at Oakmont in the U.S. Open, being a team member of the winning American Ryder Cup team, and collecting Player of the Year honors.

In order to hoist the trophy, Johnson had to overcome a potential devastating rules debacle that might have impacted him in his quest to finally earn a major title. To his considerable credit, Johnson played brilliantly down the stretch and finished three strokes clear—the final margin reduced to two shots after the USGA opted to apply a post one-stroke-penalty.

The issue coming into the 2017 season was whether Johnson would finally make his mark in professional golf.

The 32-year-old sent a clear and emphatic message with a resounding win, his 13th on the PGA Tour at The Genesis Open at historic Riviera just a week ago. The five-shot margin was actually an understatement given how Johnson played the final nine holes in “cruise control.” At one point during the final round on soggy Riviera CC, the gap between him and his nearest pursuers was as great as nine shots.

Johnson’s win pushed him to the No. 1 position in the world rankings becoming the 20th different player to get to the top spot in 31 years of its history. In addition, the win meant it was his 10th consecutive year of at least one win since starting on the PGA Tour—a feat matched only by the likes of Jack Nicklaus, Arnold Palmer, and Tiger Woods. Heady stuff indeed.

The victory also marked his 13th top-five finish in the last 17 global starts. Since Tiger Woods left the number one position in May 2013, only fellow American Spieth had been at the top until Johnson’s recent ascent.

The laconic style that symbolizes Johnson doesn’t extinguish the competitive fire that lies within the lanky 6-foot-4-inch frame. In fact, his home life has likely led him to a path of clear stability. During the L.A. event it was announced, courtesy of his fiancé’s Instagram account, that the couple is expecting their second child.

Johnson has always been known as a capable ball-striker, most notably with the driver. In the quest to take his game to greater heights, he applied himself to become a better wedge player and putter given the inability to consistently take advantage of the prodigious distances he could get off the tee. In addition, Dustin went through intensive workout sessions getting his body ready for the long grind of any golf season.

Among the top players in golf, Johnson is particularly low key, rarely showing emotion on the course. The talent that took him to the PGA Tour was always evident but the mental strength to finish off tournaments was the missing link.

D.J. is now at a clear moment when he can deepen his hold on the number one spot with The Masters coming up in just a matter of weeks. The competition for the top spot is fierce with such former number ones as Spieth, Rory McIlroy, and Jason Day all looking to return to the vaulted position at the top of golf’s pyramid.

Winning one major shows the promise of potential has been filled. Winning multiple majors becomes the separation point where talent moves into the rarefied air of greatness. Johnson demonstrated a huge burden was lifted from his shoulders when winning at Oakmont last June.

In years past Dustin could not find the right music when critical moments reached a crescendo at different key golf events. Winning the green jacket at Augusta could go a long ways in showing all records being spun now are coming from a new D.J.