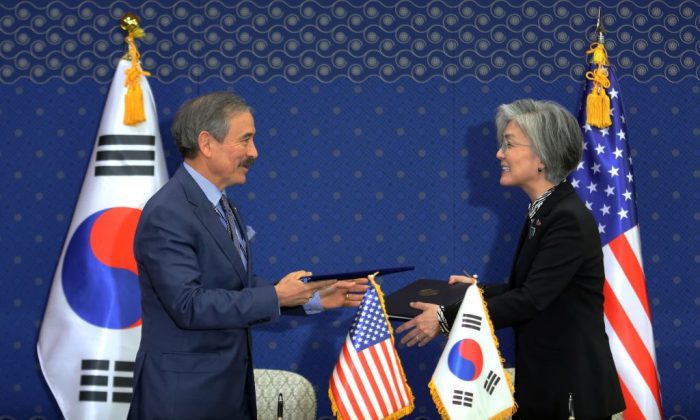 The U.S. ambassador to South Korea recently warned about the risks that vulnerable 5G networks pose to a country’s national security.

Ambassador Harry Harris gave a keynote speech at a conference titled “The Future of the Cloud” in the South Korean capital of Seoul on June 5.

While Harris did not name specific companies whose 5G equipment pose a national security threat, it was apparent he was directing his remarks at the Chinese tech giant Huawei—given how he quoted comments by U.S. Secretary of State Mike Pompeo regarding the Chinese company last month.

According to a transcript published on the U.S. Embassy in South Korea website, Harris stated: “Effective rules-based security is crucial to safeguarding communications between allies over a 5G network.”

He added: “Decisions made today regarding 5G networks will have national security implications for decades.”

5G is the next generation of wireless mobile communication technology, estimated to be at least 100 times faster than current 4G networks.

Due to the quick connection speeds, 5G is considered key for revolutionizing many industries, including health care, manufacturing, and transportation. Countries are vying for leadership in 5G because it is viewed as critical to economic growth.

“As U.S. Secretary of State Mike Pompeo explained, ‘[The] world wants systems they can trust.’ And while short-term cost savings may be tempting, the longer-term risks and mitigation costs that come with untrustworthy suppliers are very real and very large,” Harris said.

Pompeo made the remark while on a CNBC morning news program on May 23. During the television program, Pompeo spoke about Huawei’s ties to Beijing, describing it as a “state-directed business” that receives Chinese government subsidies.

Pompeo added that he had been “explaining the risks” about national security associated with Huawei to different government leaders.

The Chinese firm is also known to offer 5G equipment at much cheaper prices than its competitors.

Multiple South Korean media were quick to point out that Harris’s remarks were directed at the South Korean mobile carrier LG Uplus, a subsidiary of South Korean conglomerate LG, which is the only local company currently using Huawei equipment for its 5G networks.

Back in October 2018, LG Uplus announced that it would use Huawei equipment for its 5G services, according to South Korean magazine Business Korea.

South Korean daily newspaper the Hankyoreh, in a June 6 article, carried a comment by an unnamed LG Uplus spokesperson on the company’s use of Huawei equipment. It is not known if the spokesperson made the comment directly in response to Harris’s speech.

“There are no concerns about security, since we haven’t installed any Huawei equipment in areas where US troops are stationed,” the unnamed LG Uplus spokesperson said.

The Investor, a South Korean English-language online business news service, reported that UG Uplus’s shares fell by more than 3 percent in morning trade at the South Korean stock exchange (KRX) on June 7, following Harris’s remarks made two days earlier. The exchange was closed on June 6 for a national public holiday.