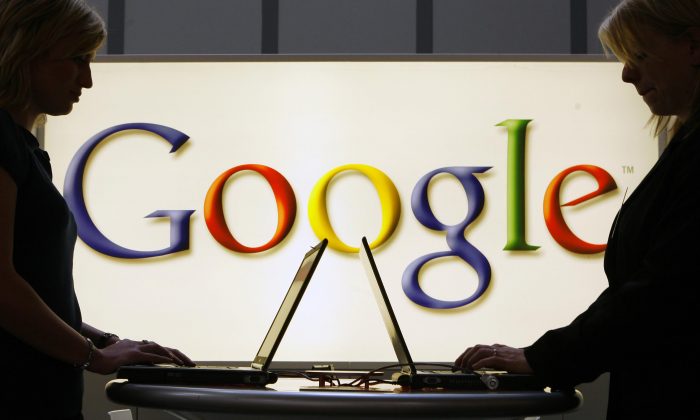 Exhibitors work on laptop computers in front of an illuminated Google logo at the industrial fair Hannover Messe in Hanover, Germany, on April 17, 2007. Google said Thursday, Dec. 11, 2014, it will shut down its Google News service in Spain to prevent publishers' content from appearing on it — ahead of a new law requiring the Internet search company to pay Spanish news organizations for linked content or snippets of news. (AP Photo/Jens Meyer)
Tech

MADRID—Google is locking Spanish publishers out of its popular Google News service in response to a new Spanish law that imposes fees for linking to the headlines and news stories on other websites.

The move announced Thursday will reverberate around the globe. Besides closing Google News in Spain, Google Inc. also is blocking reports from Spanish publishers in the more than other 70 other international editions packaged by Google News.

Google News’ exile of Spanish publishers begins Dec. 16, a couple weeks before the start of a Spanish intellectual-property law requiring news publishers to be paid for their content, even if they are willing to give it away.

That means people in Latin America, where Spanish news organizations have sought to boost their digital audiences, won’t see news from Spain via Google News. Also set to disappear are reports in English from Spanish publishers like Madrid’s leading El Pais newspaper.

People who use Google’s standard search in Spain and anywhere else around the world will still be able to find articles on their own from Spanish publications, because the law applies only to aggregators and not to individuals who do their own searches outside of Google News.

But the lost access to Google News will likely make it more difficult for people to keep abreast on what it is happening in Spain because they will have to know what to look for instead of having the top stories sorted for them.

Spanish publishers also may lose a valuable source of traffic to their websites. Google says its main search engine and other services generate more than 10 billion monthly clicks that send Web surfers to other news sites throughout the world. Google News accounts for about 10 percent, or 1 billion clicks, of that worldwide volume.

“It is hard to see what value this has achieved for the press in Spain or for Spanish (and Spanish speaking) Internet users,” Jeremy Malcolm, an analyst for digital rights group Electronic Frontier Foundation, wrote in a blog post.

This marks the first shutdown of Google News since the service debuted as an experimental project in 2002.

Richard Gingras, head of Google News, said the decision was made “with real sadness” because Google News is “a service that hundreds of millions of users love and trust, including many here in Spain.”

Spain’s AEDE association, which represents large news publishers, had lobbied for the law nicknamed the “Google Tax” to “effectively protect the rights of citizens and businesses.”

The group said it couldn’t assess the impact of the lost access to Google News until after the shutdown occurs. A spokesman for El Pais said the newspaper did not plan to comment on Google’s action. Publishers of three other large Spanish newspaper groups also declined to comment or didn’t respond to inquiries.

Spain’s new law is designed to create a new source of revenue for the country’s publishers, who, like most of their peers around the world, have been hard hit as more readers and advertisers have abandoned printed editions for digital alternatives during the past decade. The shift has hurt news publishers because digital ads aren’t nearly as lucrative as print ads.

But the linking fees could now backfire if the lost access to Google News diminishes the traffic to Spanish news publishers, making it even more difficult for them to sell digital ads.

Alejandro Tourino, a Madrid-based lawyer who specializes in media issues and has worked for The Associated Press on several legal cases, said Spanish news publishers may “have shot themselves out of the market. Time will tell.”

Spanish publishers conceivably could make up for some of the traffic likely to be lost from Google News through other outlets, such as Yahoo News, another widely used aggregator. Yahoo declined to comment Thursday on its plans for Yahoo News in Spain next year when the new linking fees begin.

The new law doesn’t specify how much publishers will have to be paid by Google or other aggregators. But it mandates the payments even if publishers are willing to waive them in return for the traffic they get from Google News.

“As Google News itself makes no money (we do not show any advertising on the site) this new approach is simply not sustainable,” Gingras wrote in a blog.

Even though Google News doesn’t display ads, it still helps Google make more money by deepening people’s loyalty to its products. The ads that Google distributes through its other services and other websites, including those run by news publishers, account for most of the company’s projected revenue of $66 billion this year.

Google News has long irked newspaper publishers and other content providers, who contend the service tramples on copyrights by creating a digital kiosk of headlines and story snippets gathered from other websites.

Google maintains it obeys all copyright laws while sending more people to websites highlighted in its News services. The company also allows publishers to prevent material from being displayed in Google News, an option few websites choose because the service is such an important source of traffic.

After Germany revised its copyright laws last year to allow — but not force — Google News to make royalty payments, Google required publishers there to give their consent for summarizing content. Most did.