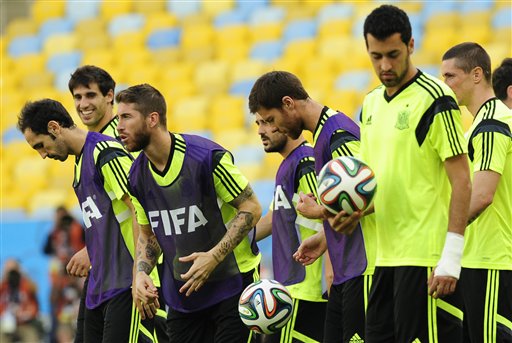 First, Eduardo Vargas had the ball in the penalty box and deftly dribbled the ball just away from the diving goalkeeper before knocking it into the back of the net in the 19th minute

Then, Charles Aránguiz gathered the ball after a punch out by Iker Casillas from a penalty kick, and launched the ball to the right side of the net.

It passed just past the outstretched hand of Casillas.

Spain couldn’t get a goal so the game ended 0-2 for the 2010 World Cup champions.

See an Associated Pressrecap below.

RIO DE JANEIRO—Spanish fans stunned by the 2-0 loss to Chile that eliminated Spain from World Cup contention say their team was overconfident from past wins and should have been rejuvenated with younger players instead of stacked with seasoned but older veterans.

Some left Rio de Janeiro’s Maracana in tears while others were swarmed Wednesday by Chilean fans shouting “It’s over! It’s over” in reference to the sudden end for Spain’s reign as defending world champion.

Fan Victor Serra from the Spanish city of Valencia didn’t expect Spain would be knocked out of the World Cup so soon but that coach Vicente del Bosque erred badly not giving a chance to younger team members with more to prove.

Said Serra: “The problem is they have already won everything.”