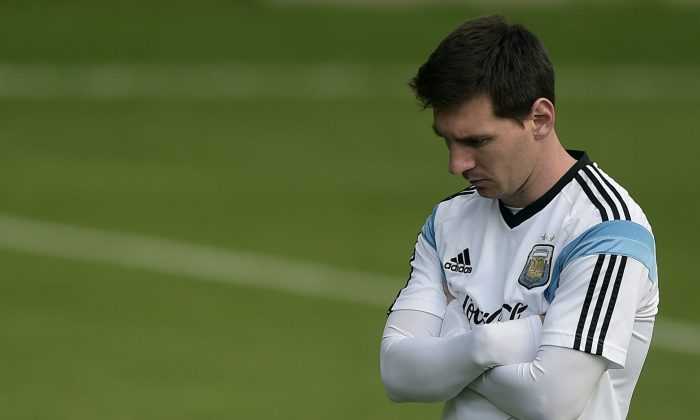 Argentina's forward Lionel Messi looks on during a training session at 'Cidade do Galo', their base camp in Vespasiano, near Belo Horizonte, some 470 Km north of Rio de Janeiro, Brazil on July 10, 2014, ahead the 2014 FIFA World Cup final football match against Germany to be held at The Maracana Stadium in Rio de Janeiro on July 13. (JUAN MABROMATA/AFP/Getty Images)
Americas

Messi’s family released a statement claiming they are not guilty of any wrongdoing. They also threatened to hit media outlets with a lawsuit if they released information that linked the Barcelona player to accounts in Panama.

According to the the International Consortium of Investigative Journalists (ICIJ), the Panama Papers include the names of almost 20 well-known soccer players, current and former, from clubs like Barcelona, Manchester United, and Real Madrid.

Messi is one of them.

The Argentine soccer player has already been charged with three counts of tax fraud alongside his father, for allegedly defrauding Spain’s tax office of $4.6 million in unpaid taxes during the years 2007 to 2009. They are accused of using offshore companies in Belize and Uruguay. Messi and his father are due to appear in court in May, and if found guilty, may face two years in prison.

Lionel Messi has not carried out any of the acts of which he is accused in the stories.
— Messi family statement

The data leak shows that Messi and his father owned another offshore company in Panama: Mega Star Enterprises. According to ICIJ, the first reference to the company in the Panama Papers was on June 13, 2013—a day after authorities in Spain filed tax fraud charges against the soccer star and his father. June 23, 2013 was the first reference in the records that showed the Messis owning the Mega Star company.

Spanish tax officials said on April 4 that they are “closely investigating the information that has been published.”

The Spanish newspaper, El Confidencial, ran a story based on the breached data claiming that the Messis set up the company in Panama a day after Spanish prosecutors filed charges, and showed records that appeared to have Messi and his father’s signatures on them.

According to The Independent, the soccer player plans to sue El Confidencial for defamation over the allegations that link him to the Panama Papers.

The facts reported on are based on mere conjecture and emanate from partial and biased documentation.
— Messi family statement

The Messi family said in a statement it “never used the company” that has been linked to Messi in the so-called “Panama Papers.”

“Lionel Messi has not carried out any of the acts of which he is accused in the stories,” the statement said. “The allegations of him having designed a tax evasion project are false and injurious, as are those relating to the creation of a money laundering network.”

The Messis also said that the company established in Panama is inactive and “has never had any capital or active current accounts” and that it “dates from the old corporate structure set up by the Messi family’s previous financial advisers, with the tax implications for Lionel Messi having been settled at the time.”

It added that “all of the income from his image rights, including both earnings made prior to and following on from the case with the tax agency have been declared to the Spanish tax authorities.”

It said the data released now is linked to “totally unrelated events which are currently pending resolution or indeed have been dismissed” by the courts.

“In conclusion, the facts reported on are based on mere conjecture and emanate from partial and biased documentation, which has been disclosed using the lure of Messi’s name and the player’s reputation,” the statement added.

“This is particularly serious when accusations of criminal offenses as serious as tax evasion and money laundering are made, allegations which bring about irreparable damage to Lionel Messi,” it said.

The soccer star’s club said it stands behind its captain. A statement from the club said, “FC Barcelona has sent its affection and support to the player and to his whole family. The Club makes all of its judicial means, fiscal and administrative, at the family’s disposal in order to make his actions and honor clear in this case.”