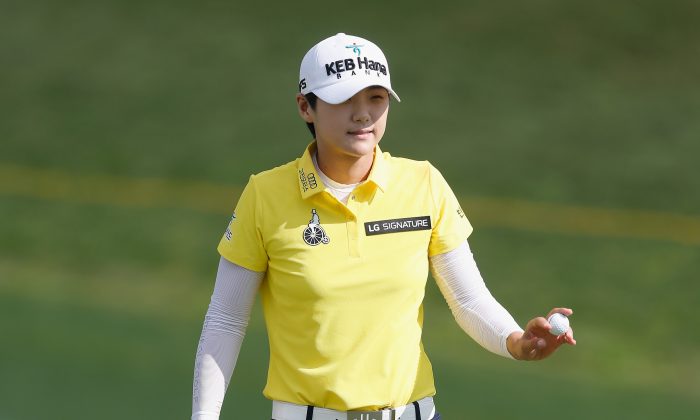 Sung Hyun Park waves to the gallery after making a birdie putt on the 18th hole during the third round of the U.S. Women's Open Championship at Trump National Golf Club on July 15, 2017 in Bedminster, New Jersey. (Matt Sullivan/Getty Images)
Golf

A nation in domination
By M. James Ward
biggersmaller
Print

BEDMINSTER, N.J.—The most important championship in women’s golf has become the domain of professional golfers hailing from South Korea. Sung Hyun Park’s victory at the 72nd U.S. Women’s Open at Trump National Golf Club was a testament not only to individual achievement, as her final round 67 demonstrated, but how, over the course of a decade, the fingerprints of South Korea are clearly becoming a steady pattern on major championship hardware.

Coming into the championship no less than nine South Korean women were ranked in the top 25 worldwide. More impressively, six of the top 11 hail from South Korea. The United States has with six in the top 25. In the last 10 U.S. Opens, the victor has been a South Korean seven times.

At this year’s event, South Korean golfers claimed the first three positions. For much of the final round it seemed very possible an amateur from that country—Hye-Jin Choi—might become just the second golfer to win the title matching what Catherine Lacoste did in 1967. Nonetheless, the 17-year-old claimed low amateur honors for the second consecutive year and set a new 72-hole amateur scoring record.

Only once since 2010 have there been multiple American winners of the women’s major championships in the same year. Lexi Thompson has been the main contender with a No. 3 world ranking, but her performance at the U.S. Open—tied for 27th—was simply lackluster. But, the rest of the American involvement is much further down the totem pole and has many wondering why this is happening given that the United States has the most players and courses of any nation.

At last year’s Summer Olympics in Rio de Janeiro, where golf was reintroduced to the Games after a lengthy absence, Asian women claimed all three medals with South Korea’s Inbee Park taking gold.

How They Do It

Richard S. Son, a Korean-American who operates Ascend Performance Golf, teaches Sei Young Kim, who finished in a tie for eighth, as well as other aspiring Korean women. Son says the South Korean process calls for total immersion where promising players are exposed at a very young age.

“If players have the slightest flaws in their swings, the intensity in the teaching is there to build beautiful repeating swings,” Son said. The cultural work ethic is also an element spurring South Korean women to push harder.

Son says that none of the South Korean women come to the United States until they have shown the wherewithal to win consistently in their native land. The pressure internally to succeed provides a clear separation between those who are good and those who are exemplary.

What began with 20-year-old Se-Ri Pak’s 1998 U.S. Women’s Open triumph opened up the floodgates. The consistency of play, the elimination of mental errors, and the ability to make adjustments when called upon, has provided a clear roadmap for other South Korean women professional golfers to follow. The validation of the teaching has come with key victories. Success buidling upon success.

The interesting dimension is that while South Korean women have clearly attained superiority, the same situation has not applied for the men. There is no simple answer to explain this. K.J. Choi and Y.E. Yang have been the most prominent South Korean players, but their presence in today’s super competitive men’s game is far less than several years ago.

The success of the South Korean efforts have not gone unnoticed by countries nearby. Son indicated China has spent considerable resources to lure the top South Korean teachers to their country, even though the communist ruling government officially frowns upon the Western game.

For those left to compete against the South Korean onslaught, the future does not look bright. The American golf market is going through clear changes with less players playing and the saturation of courses requiring many to either scale down operations or close entirely.

Although there has been concerted efforts by major golf organizations in the United States through the United States Golf Association and the PGA of America to engage young girls to play the game, the results will likely not be seen for some time. The bigger question is whether such efforts can germinate and have some sort of meaningful effort that will foster a clear counterpoint to the unrelenting triumphs of the women of South Korea.

The utter dominance at Trump National Bedminster has clearly set the benchmark higher. Nearby countries such as China, Japan, Thailand, and others in Asia will seek to push themselves to the top of the pyramid. So will those from America, Canada, and Europe.