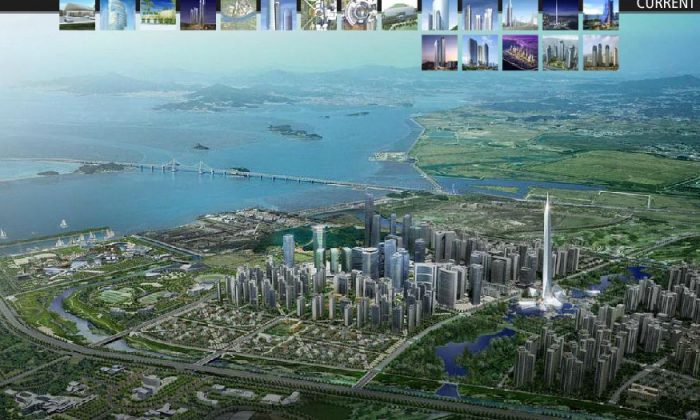 A screenshot of GDS Architects shows plans for the 'invisible' Tower Infinity outside of Seoul.
Asia & Pacific

South Korea’s “invisible” tower will be a world’s first after the South Korean government recently granted approval to build the high-tech tower outside of Seoul.

The Tower Infinity, designed by GDS Architects of the U.S., will be 1,476 feet tall, reported CNN. It will have the third highest observation deck on Earth.

It will be among the top-ten tallest towers in the world.

The tower will be fitted with LEDs and cameras to create the illusion that it disappears. The tower’s design started in 2004 but the South Korean government only approved of it recently.

According to the Inhabitat website, the tower will feature a water park, roller coaster, wedding areas, gardens, and restauarants.

“Designed for a location near the Incheon International Airport, Tower Infinity will also have the distinction of being ‘invisible’. Using optical illusions and lighting, the tower will appear to disappear into the sky, making it a less obtrusive anti-tower,” writes Inhabitat.

The developer of the building has not released a completion date for it.

“Instead of symbolizing prominence as another of the world’s tallest and best towers, our solution aims to provide the world’s first invisible tower, showcasing innovative Korean technology while encouraging a more global narrative in the process,” said Charles Wee, GDS design principal, according to CNN.