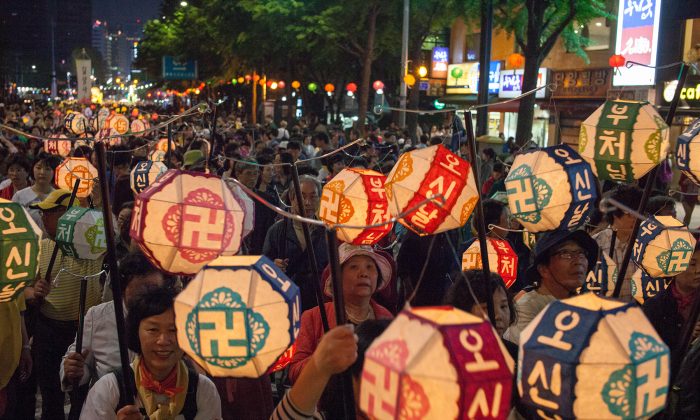 Lanterns bearing the Wan symbol, the symbol of the Buddha, are carried through the streets of Seoul in the Lotus Lantern Parade. (Jarrod Hall/The Epoch Times)
Asia & Pacific

On the evening of Saturday May 11, thousands of Korean Buddhists carried paper lanterns through the streets of downtown Seoul. The Lotus Lantern Parade celebrates Korean Buddhist culture and traditions. It’s one of the country’s most popular annual events.

The two and a half hour parade launched the Lotus Lantern festival, which lasts for one week and is held each year in May to mark the birthday of the Buddha. The festival features Buddhist ceremonies, performances of traditional music and ritual dance as well as folk games, temple food and meditation.

“This Buddhist festival is really important to me because I can share Buddhism’s features with others,” said Amy Kim, a university student from Seoul, “It’s not just about belief – I can show other people, this is how we do things…. It makes me feel proud.”

The festival is called Yeondeunghoe in Korean, which literally means “lantern lighting”. The lighting of lanterns to celebrate Buddha’s birthday has been observed in Korea since the Goryeo Dynasty, over 1000 years ago. The lanterns symbolise the light of wisdom.