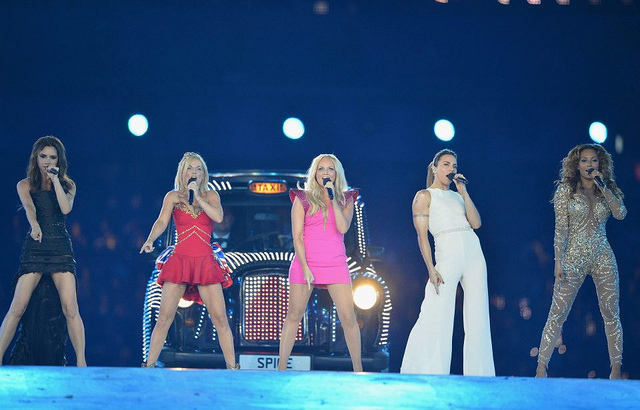 The Spice Girls are planning to make a huge comeback. (“The Spice Girls!” by Sarah & Austin Houghton-Bird/Flickr [CC BY 2.0 (ept.ms/2haHp2Y)])
Entertainment News

Source: Spice Girls to Reunite in 2018

All five Spice Girls—including Victoria Beckham—will reunite for a TV special and a new album, according to the Sun newspaper.

Mel C has apparently been working in the background with the girl band’s original manager, Simon Fuller, for the big comeback.

A source told the Sun the five of them have been in “secret talks” since the summer and they are all on board for the reunion.

The news finally puts an end to years of “will they/won’t they” rumours, and comes months after reported resistance from Mel C and Victoria to be part of the reunion.

The new album will be a compilation, according to the Sun.

“As it stands, they will be working together on a series of projects, which will include an album and a TV special celebrating the Spice Girls,” said the source, who is a former aide to the girl band, according to the Sun.

“Getting Victoria to agree has been a coup for everyone involved, given she has always been the person holding back on a reunion.”

“The fact she is on board now is down to how much closer the five of them have become recently.”

It is believed that the girls have grown closer after Mel B’s tumultuous divorce with Stephen Balafonte, as well as the birth of Geri’s son Monty.

According to inews Geri had previously been trying to plan a reunion, but had “given up trying.”

“I really pushed to get everyone back together. It got to the point where I just had to let it go,” she told Red magazine. “I still love the girls and there are other bits and bobs in the pipeline.”

Their last performance together was at the London 2012 Olympic Closing Ceremony.

Have you heard the news? #SpiceGirls #Reunion2018

Fans of the girl group have expressed their excitement on Twitter.

All 5 Spice Girls reuniting in 2018 might just be the best news of the year. pic.twitter.com/rGu7bdK7de