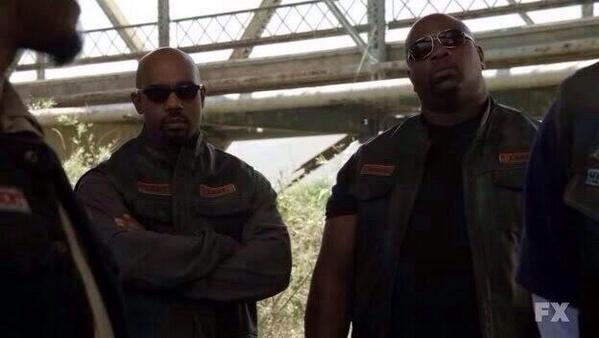 Sons of Anarchy Season 7 Spoilers: T.O. Cross and Grim Bastards to Get Payback?

Sons of Anarchy season 7 is currently in development and creator Kurt Sutter has been dropping spoilers along the way.

Sutter recently told fans that the Grim Bastards will appear in the upcoming season, which will premiere in September 2014.

Cross and the gang first appeared in season 2, when Clay Morrow and SAMCRO convinced Marcus Alvarez to replace the Calaveras’ role as muscle and security for drug shipments with the gang.

They appeared again in season 5, when they hid Randall Hightower after he was released from prison, unaware that he was responsible for murdering SAMCRO member Opie Winston. The Sons of Anarchy tracked them down and kills Cross’ cousin despite Cross pleading for his life. Jax defended his actions by saying that T.O. also lied on his word to give Randall to the club.

The full details of the Grim Bastards situation in season 7 haven’t been outlined.

But Beach just said on Twitter: “Who hopes T.O. Cross & #GRIMBASTARDS get a little payback on Sons of Anarchy season 7?” He tagged Sutter, Theo Rossi (Juice), and Kim Coates (Tig).

Fans said yes, but one offered a warning.

“They will but watch out, the sons always win in the end,” Craig Henderson speculated.