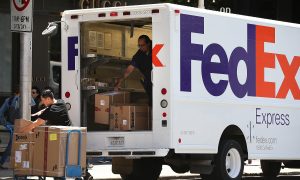 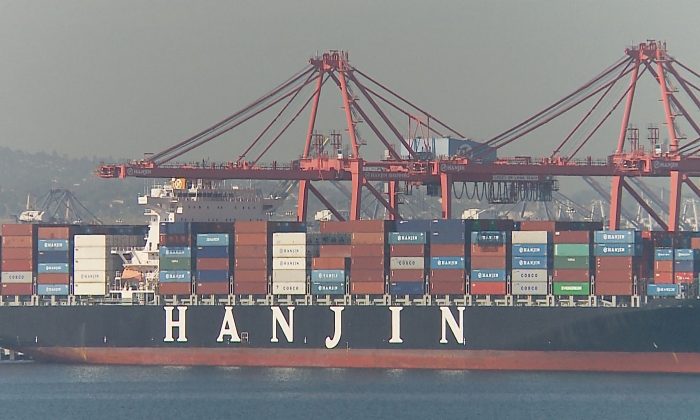 A container ship at the Port of Long Beach on Oct. 30, 2014. During this year's peak holiday season, the twin ports of Los Angeles and Long Beach are seeing the worst congestion problem since an employee strike in 2012. (Eric Zhang/Epoch Times)
US

LOS ANGELES—Every year, the twin ports of Los Angeles and Long Beach, which together receive 40 percent of the country’s goods, experience a surge in shipments in the lead-up to the holiday season.

But this year the ports are seeing the worst congestion problems since an employee strike in 2012.

Lately, there have been six to eight vessels anchored outside the ports just waiting to unload, while normally there are none, say port staff.

“The holiday season typically runs from late August through October. This year, holiday season has been prolonged, given some of the congestion issues that we’re currently experiencing,” said Noel Hacegaba, Port of Long Beach’s chief commercial officer.

Hacegaba said the fact that some goods will be late to stores for the holiday season is just the “reality.” Cargo is taking anywhere from one week to 28 days to move through the port.

At the heart of the problem is a chassis shortage. Chassis are the wheeled trailers that hook onto trucks that carry the cargo containers.

Shipping companies used to provide chassis, but about three years ago they started selling them to independent companies to cut down on cost and storage space. The relocation and reorganization of the chassis, which happened largely in the past year, has made the holiday backlog at the docks worse.

The Port of Long Beach is now planning to purchase a fleet of chassis, so they will be available for use during peak season. Officials said they were working to ensure that this “never happens again.”

Other causes of the delay include an increase in the number and the size of shipping vessels. October has seen the highest number of ships of any month this year, according to the Maritime Information Center.

Total container traffic through the Port of Long Beach was 7.3 percent higher in September than the same time last year, while the port of Los Angeles recorded an 11 percent increase.

The size of commercial ships have also increased rapidly in recent years. In 2000, shipping vessels maxed out at 8,000 container units, while today the largest is just over 18,000.

All this adds up to more cargo at the ports, and more wait time while that cargo is processed.

Hacegaba said the ports’ congestion will probably extend through November.

“Then at that point, at the end of November, things will slow down a bit, and then they will begin to ramp up again in late January, early February for Chinese New Year,” said Hacegaba.

Some ships have rerouted to other ports, such as Oakland, California, Prince Rupert in Canada, and Mexico’s Lázaro Cárdenas. Other retail companies have chosen to fly their products in to guarantee arrival in time for the holidays.

Others are just getting their goods late.