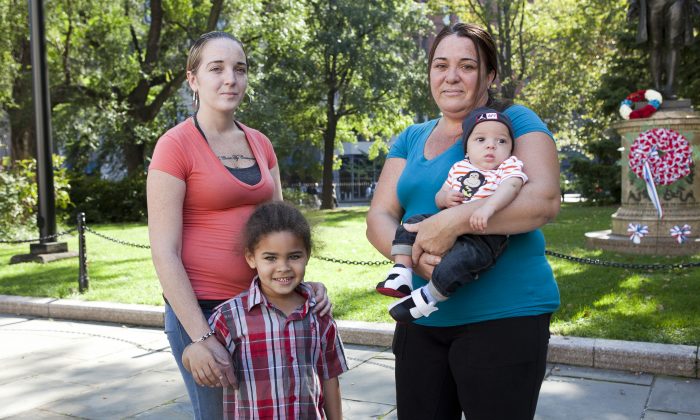 NEW YORK—It’s been almost one year since Hurricane Sandy wrecked havoc on New York City. For one group of Sandy victims, the crises generated by the storm is far from over.

About 300 people whose homes were destroyed or damaged in last October’s storm are still living in a temporary city-run hotel housing program. Having previously been allowed to stay longer by court intervention, they now face eviction on Friday.

The homeless Sandy evacuees have the support of several City Council members and the Legal Aid Society lawsuit. Some of them also recently received federal voucher assistance, but are awaiting final approvals to move in to their new homes.

The first eviction notices were sent out in April, but the lawsuit against the Dept. of Homeless Services has delayed the end of the program.

The most recent letter sent out to evacuees Sept. 27 states that they must leave the hotel rooms they are in by check-out time on Oct. 4. The letter includes a list of intake centers for city homeless shelters as a housing option.

Many evacuees are on the verge of securing permanent shelter, according to their attorney and multiple first hand accounts. Many of them fear the thought of living in a shelter, and worry that they will become lost in the system if they don’t stay put until they have a permanent home.

Wanda Wilson has two children, ages one year and five years. She said she and her family qualified for a voucher program that will secure a home for them.

The voucher is from the Temporary Disaster Assistance Program (TDAP) that’s run through the city’s Dept. of Housing Preservation and Development.

“How are you supposed to get back on your feet when they have you moving from place to place?” said Wilson, who has a home lined up through TDAP.

She is only waiting on the mandatory inspection, which she has been told will take from one to two weeks. If she, and others like her in the hotels, are forced to leave on Oct. 4, they might face living in homeless shelters.

According to City Council member Donovan Richards, the vouchers “just became available.” They are intended for low-income New York City residents who were displaced by Hurricane Sandy, remain homeless, and have not qualified for other assistance.

“We have a lot of people … who are close to finding housing,” said Joshua Goldfein, a lawyer from the Legal Aid Society.

Desiree Marino, 43, has been living with her 77-year-old mother and 16-year-old daughter in Park Central Hotel at 55th and 7th Ave. in Manhattan. Her daughter gets up at 5 a.m. to get to school on time in Long Island, and her mother is in outpatient recovery from congestive heart failure.

Marino, a retired police officer living on partial disability, said that she found an apartment, but is waiting on TDAP approval.

“All they have to say is ‘yes’ and we have a home,” said Marino.