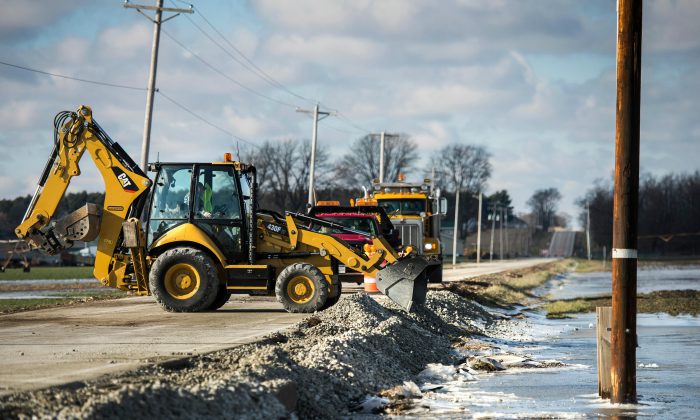 Tazewell County Highway Department work crews add gravel to rebuild the shoulder of Townline Road as floodwater from the Mackinaw River start to recede in Illinois on Jan. 4, 2016. (Fred Zwicky/Journal Star via AP)
US

A rare winter flood that brought record or near-milestone crests along the Mississippi River and its tributaries, claiming at least 25 lives in Missouri and Illinois, had largely subsided in the region as of Monday. However, the Illinois River continued to rise in some Illinois stretches.

Here’s a rundown of Midwest flooding, by the numbers:

The National Weather Service says that’s the amount that deluged much of Missouri and portions of Illinois over a three-day period starting Dec. 26. The pounding proved epic in some areas: The 11.43 inches that pummeled Springfield, Missouri, in December broke the city’s 1895 record for precipitation for that month. Hydrologists with the weather service say such drenches occur in the U.S. only every 100 to 300 years.

As of Monday morning, Missouri had reported 15 flood-related deaths while Illinois had 10. Nearly all of those fatalities resulted from vehicles being driven over flooded roadways, including five international soldiers from Missouri’s Fort Leonard Wood whose vehicle was swept away by floodwaters. Without explanation, the state is not including 40-year-old Rickey Lerma, who drowned in the swollen St. Francis River in Missouri’s Bootheel while trying to elude authorities.

While volunteers helped fill tens of thousands of sandbags, the state of Illinois provided 988,000 of them to communities threatened by the Illinois, Sangamon, Iroquois and Mississippi Rivers through Sunday, Illinois Emergency Management Agency spokeswoman Patti Thompson said Monday. Illinois taxpayers also doled out 10,500 tons of rock, 4,546 tons of sand and 717 rolls of plastic, with the state’s inmates contributing 8,187 hours of labor in filling 125,000 sandbags, Thompson said. Those sandbag numbers did not count what communities provided for themselves.

Two wastewater treatment plants near St. Louis were so damaged by the floodwaters that raw sewage spewed into the Meramec River, which feeds into the Mississippi River. Flooding also forced a four-day halt of Amtrak service between St. Louis and Kansas City, Missouri, before it resumed Sunday. The Franklin County town of Union was mostly closed after waters from the Bourbeuse, Meramec and Missouri rivers swamped it, cutting off most surrounding roads.

The exact number of people forced to evacuate their homes and towns isn’t clear, though that number certainly reached into the thousands. Roughly 400 left their homes in West Alton, Missouri, near the Mississippi River, and hundreds more fled the Missouri communities of Pacific, Eureka, Valley Park and Arnold.

The weather service says record flooding happened at at least eight spots along inland rivers in Missouri, notably along the Meramec River—a tributary to the Mississippi—near St. Louis. At Thebes in southern Illinois, the Mississippi peaked last Saturday nearly 2 feet above a May 1995 record. Last Friday, the Mississippi reached 48.9 feet at southeast Missouri’s Cape Girardeau, eclipsing by four-tenths of a foot the local record set during the catastrophic floods of 1993.

That’s what the American Red Cross says it has doled out to flood-stricken people in Missouri and Illinois, giving 586 victims refuge along the way as of Sunday night.