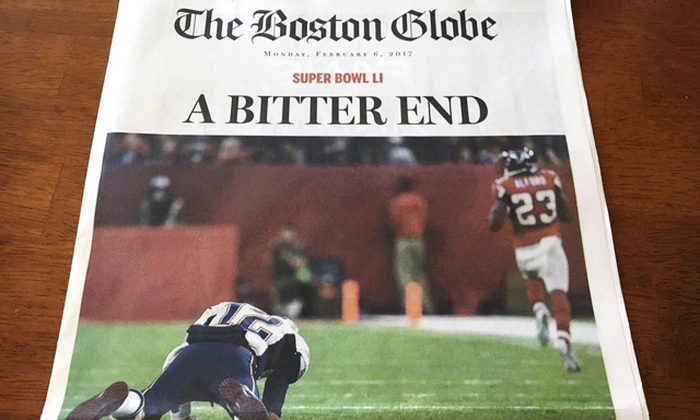 This Monday, Feb. 6, 2017, photo provided by Mary Tivnan shows a front page of an early edition of The Boston Globe in North Fort Myers, Fla. (Mary Tivnan via AP)
Other US

BOSTON—It wasn’t exactly “Dewey Defeats Truman,” but some Florida readers of The Boston Globe learned a different Super Bowl outcome than most on Monday morning.

Early editions of New England’s largest newspaper ran a front page suggesting the Patriots lost to the Atlanta Falcons on Sunday night, with a headline that read “A Bitter End” over a large image of star quarterback Tom Brady falling to his knees. The Falcons had a comfortable lead going into halftime, but the Patriots mounted a furious rally and won 34-28 in overtime for the franchise’s fifth championship.

Boston-area editions ran the headline “Win For The Ages” and showed a triumphant Brady holding up the championship trophy as confetti fell.

“When my husband saw that headline he absolutely bounced off the wall,” Mary Tivnan said of the front page they received in North Fort Myers, Florida, where the Brewster, Massachusetts, couple spends their winters.

Tivnan said her husband, Frank Tivnan—a former Boston Herald political reporter and spokesman for the late Boston Mayor Kevin White—went out Monday afternoon to scrounge up more copies of the Globe for posterity.

Late games generally require newspapers lay out pages ahead of time so they can publish quickly.

But Bakst, a retired political columnist for The Providence Journal in Rhode Island, suggested a vaguer headline should have been used as a placeholder.

Bakst also wondered what impact the flub might have on the print newspaper industry broadly, which has been struggling as more people turn to social media and online news sources.

“I worry that this incident might cause some readers to say, ‘That’s it, I’m done with newspapers,'” he said.