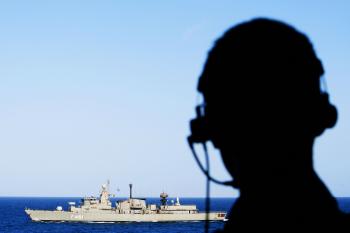 A crew member from the Dutch frigate Hr. Ms. Evertsen, looks at sea as his vessel receives a component from the Navarinon (F461) of the Greek navy, in the Indian Ocean on Sep. 19. (ROBIN UTRECHT/AFP/Getty Images)
International

The ship, the Ariana, was captured last May as it sailed southwest of Seychelles, an archipelago nation northeast of Madagascar. The ship was freed after the ship’s owner paid $2.8 million in ransom. The sailors are reportedly in good health and on their way home.

Yushchenko said that the successful conclusion to the episode was tough but was possible through cooperation between national and international security agencies.

“We had a very complicated situation. To be honest, the talks of liberation often reached a deadlock,” said the president in a written statement.

Yushchenko said that a plane would soon bring the crew back to Ukraine. The fuelless ship first will be towed to the nearest port.

“It is not clear when the freed Ukrainians will be at home,” said Deputy Foreign Affairs Minister Chalyi Valerii on Ukrainian TV Inter. He said he hoped it would be by the end of the year.

Earlier, the Council of National Security of Ukraine decided to send 30 Ukrainian special force soldiers to participate in the European Union’s anti-piracy operation, “Atalanta” in the Horn of Africa.

The operation of navy forces of the EU to combat piracy was launched this November after the United Nations agreed to allow foreign warships to patrol the territorial waters of Somalia.