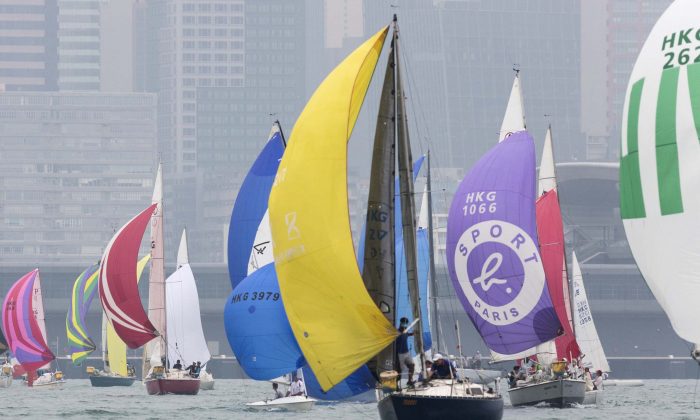 HONG KONG—The Royal Hong Kong Yacht Club’s Top Dog Trophy Series is at its halfway stage, the Around the Island race was on Sunday Nov 26 and the Lipton Trophy was held last weekend, on Saturday Dec 3 in Victoria Harbour, with 53 boats competing.

Steve Bourne Helming Magic 25 “Merlin” came 7th in the Lipton Trophy but together with his 3rd place finish in the Around the Island race is the clear leader of the Top Dog Trophy series, after 2 races.

The 2016 Around the Island was significant in that only 54 of the 100 plus boats that entered finished the course in the allotted time, leaving a large number of competitors in the DNF category on 51 points – giving them a hard task to win the series.

“Solstice”, although picking up the prestigious prize for the  Lipton Trophy is one of those recording DNF in the Island race and although in 14th place in the series , is on 52 points. The next 5 boats in the Lipton Trophy: “Buster”, “Dragon Fly”, “Panopae”, “Gunga Din” and “Victory 9” are in similar points positions.

Bourne has a good advantage at this point in the series but his close rivals will be chasing hard to close the gap in the next 2 races. The HKRNVR takes place on Jan 14 and Tomes Cup is on April 28, 2017 both to be held in Victoria Harbour.