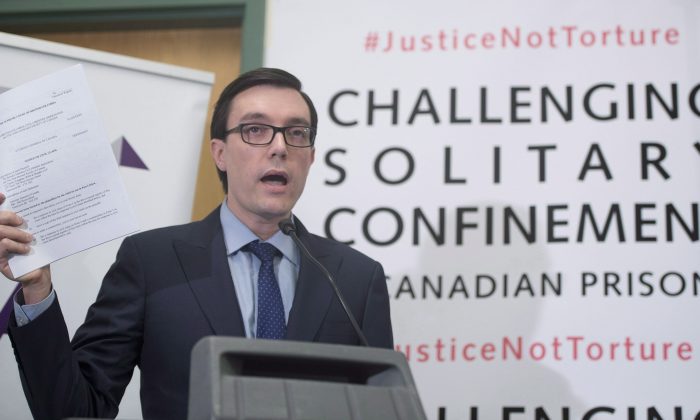 Josh Paterson of the British Columbia Civil Liberties Association addresses a news conference in Vancouver on Jan. 19, 2015. The BCCLA and the John Howard Society have filed a lawsuit against the Attorney General of Canada regarding the use of solitary confinement in prisons. (The Canadian Press/Jonathan Hayward)
Canada

The Canadian Civil Liberties Association and the Canadian Association of Elizabeth Fry Societies have announced a petition to the Ontario Superior Court that will challenge the use of solitary confinement in jails, calling it an inhuman practice.

The case follows a similar filing in British Columbia by the two groups.

“We believe that this issue of solitary confinement has gone on for far too long in Canada,” said the CCLA’s executive director Sukanya Pillay.

The two organizations say the Ashley Smith case has pushed longstanding concerns into the public discussion. Smith committed suicide in 2007 after more than 1,000 days spent in solitary confinement, prompting a coroner’s inquest into the handling of the case.

However, a report in December 2014 by Correction Service of Canada rejected one of the coroner’s key recommendations—the abolishment of segregation.

“We were very pleased with the jury’s verdict and recommendations, but we were disappointed with the response of the Canadian government last fall to the jury’s recommendations. We have been working on various projects for quite a while, but we decided to hone our interest to challenge the constitutionality of this legislation,” said Pillay.

Kim Pate, executive director of the Canadian Association of Elizabeth Fry Societies, said women with mental health issues are overrepresented among those who are segregated.

Pate cited recent research from Sharon Shalev, a criminologist at the London School of Economics, who has found anywhere from 30-90 percent of people in solitary confinement suffer long-term impacts such as insomnia, confusion, feelings of hopelessness, hallucinations, and psychosis.

“Some of the people I keep in touch with, even though they may have been out [of jail] 15 or 20 years, still talk about the long-term impact of solitary confinement. These are individuals that may have spent months or years in segregation. But people talk even after a few days starting to experience things like hallucinations,” said Pate.

The organizations state in court documents that “the practice of solitary confinement in Canadian penitentiaries is fatally flawed and as practiced, amounts to torture, and, as such, cannot be countenanced in a civilized society.”