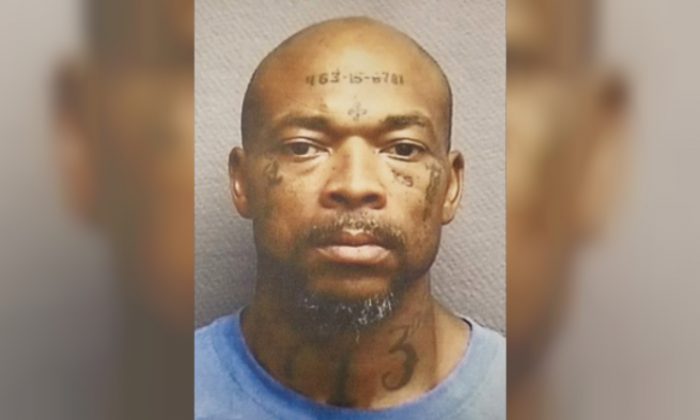 Texas police are asking the public for help to capture a serial robber who has his social security number inked on his forehead and his area code tattooed on his neck.

Robert Wooten, 40, is suspected to have carried out at least six armed robberies at stores, including a Walgreens pharmacy, but investigators haven’t been able to catch him.

“They’re calling this guy ‘Social Security’ because he actually has his Social Security [number] tattooed across his forehead,”Frank Heenan, a Houston police investigator, told KPRC.

Wooten began his streak of robberies on Oct. 15. He walked into a convenience store, asked the cashier several odd questions and then said, “You care about your life?” while lifting his shirt to reveal a gun. He then demanded a pack of cigarettes, KIAH reported, citing court documents. Wooten came back to the same store and robbed it of cigarettes again on Nov. 4.

In another robbery, surveillance footage shows Wooten strolling into a store wearing American flag shorts. He then throws a bag at an employee and demands for it to be filled with money.

Wooten has robbed a corner store, a pawn store, a Family Dollar store, a Metro PCS outlet, and a Walgreens pharmacy.

The suspect’s face and neck are covered in several tattoos, including his social security number, 463-15-8781, on his face, and his telephone area code, 713, on his neck.

Wooten has a long rap sheet with charges including aggravated robbery, burglary, and indecent exposure among others. The suspect did not injure anyone during the robberies.

If you have information about Wooten’s whereabouts, you’re asked to call the Houston Police Department at 713-884-3131 or Crime Stoppers of Houston at 713-222-TIPS. Calls to Crime Stoppers allow tipsters to remain anonymous and can result in rewards of up to $5,000.