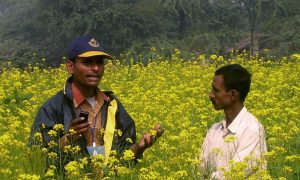 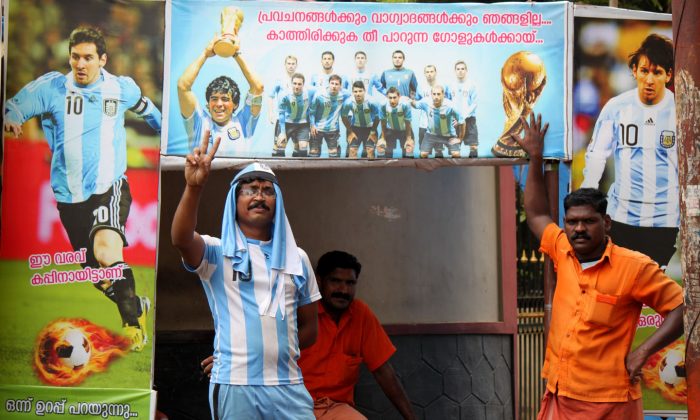 An Argentina soccer team fan on a roadside, shows the victory sign ahead of the Argentina–Netherland’s match on Wednesday at Thrissur, India on July 9. Soccer is extremely popular in the region from central to northern Kerala called the Malabar coast of India. (Venus Upadhayaya/Epoch Times)
India

KERALA, India—The World Cup has brought out the fervor of rabid soccer fans on India’s western coast, a region that is an island in a country of cricket fans.

In the central Kerala city of Thrissur, the markets, roadsides, and even residential areas have a festive World Cup look—huge billboards, sponsored by soccer fan clubs of the Argentina and Brazil teams adorn every nook and cranny, and cars and busses are adorned with different teams’ colors.

“Brazil and Argentina are the most favorite teams in Kerala because they have won the maximum World Cups,” explained Leo Vincent, a small sports paraphernalia dealer in Thrissur.

The love for soccer on the Malabar Coast, which includes most of the state of Kerala and the coastal region of Karnataka State, can be attributed to its colonial past.

“Soccer developed in the region because the local people of Malabar started playing it with the British police,” said Veena Mani, a student at the Indian Institute of Technology in Chennai, who is writing her doctoral thesis on how soccer molds identity in Malabar.

According to the website dedicated to Kerala police history, the police force, called the Malabar Special Forces (MSP), was formed in the 1920s to dispel social unrest in the region. Historically they are known for their successful adoption of guerrilla fighting tactics, but on a softer side, are known for leaving their legacy in soccer.

According to Mani, there is also a practical reason for soccer being played in Malabar. She said cricket is not more popular there because, if played on the beach, the ball could easily get lost in the sea. In soccer, the ball is much easier to control.

Cricket was a game of the British elite, and is now associated with Indian nationalism, she said.

“Malabar has not been attached to Indian nationalism much,” Mani said.

As the World Cup finals draw near, sales of jerseys and flags of the top teams reach record highs.

According to Vincent, 24 original Brazuca balls ($116) and thousands of copies ($7) have been sold across Kerala since the World Cup began.

On a roadside in Chakkamokua, a residential area in the city, a billboard by a girls’ dormitory supports Argentina. The main players on the Argentine team are shown riding in a chariot, a visual reference to Krishna driving a chariot into battle in the Sanskrit mythological epic, the Mahabharata.

The soccer frenzy in the region is not limited to the World Cup however. There are many local tournaments, which employ talented youngsters. A starting salary is 2,000 rupees ($33) a match, and more experienced players can make 7,000 rupees ($116). According to the website PayScale, an information technology consultant in the same region makes about 800 rupees ($13) an hour.

As the World Cup finishes this weekend, it is safe to say that even after it is over, soccer will remain a major part of the economy and culture of Malabar.