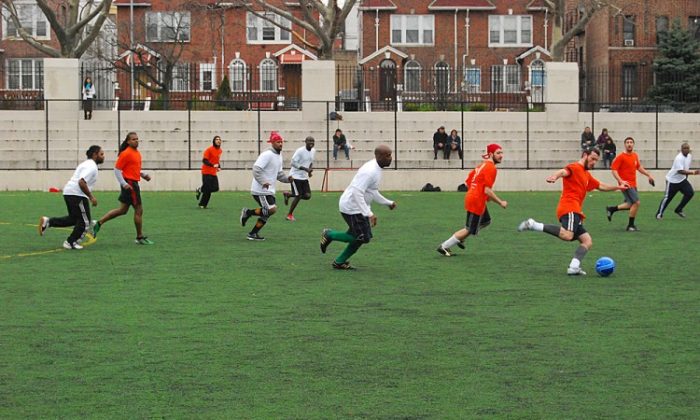 Soccer for Harmony held a rematch between Mendy's Deli and the Caribbean team from the Brooklyn Central Soccer League on Sunday at the Hamilton Metz Field. (Catherine Yang/The Epoch Times)
US

NEW YORK—The Caribbean team beat Orthodox Jewish soccer team sponsored by Mendy’s Deli 4-2 in the Harmony tournament on Sunday at the Hamilton Metz Field in Crown Heights, Brooklyn. The tournament was started last December to bring together the different groups and ethnicities of Crown Heights.

Sunday’s game was a rematch from last December, when Mendy’s Deli Orthodox Jewish soccer team beat out two Caribbean teams in what was considered a major upset.

“Last year’s was pretty exciting but cold. We expect to do much, much better,” Caribbean team co-coach Fitz Hosford said before the game. “[Soccer for Harmony] is a really good idea. It brings together the community and everyone together. It’s a sport you don’t have to know any specific language you know. This is also what we are about, helping the young ones to be better sportsmen, better in all ways.”

The Jewish team was missing three key players and, in the spirit of community, had a member of the Caribbean team step in so the teams could play 9-on-9.

Nathan Abikasis of the Jewish team said, “We had a great time, a great game.”

Soccer is the most popular sport in the world and a great way to bridge gaps, according to Organizer Josef Cabral.

The tournament honors Christopher Rose, a 15-year-old who was murdered in an act of gang violence in 2005. His father Errol Rose, one of the organizers, said the reaction to the event has been great.

Before the game, Rose said, “Everybody was like ‘Wow! We never even realized something like this could happen.’ The Caribbean players thought they were going to beat the Jewish players, but of course they didn’t, so now everybody’s enthusiastic. They want to be back here again, they want to come again; they want a repeat performance.”

“Harmony is one of the greatest things in the world,” Rose said. “Whether you’re black, white, pink, or green; harmony is what’s going to bring the world together.”

“[The Caribbean teams] wanted a rematch right away. In fact, they requested one for New Year’s Day,” said Nancie Katz, executive director of Seeds in the Middle, the organization that hosted the Soccer for Harmony tournaments. Seeds in the Middle is a nonprofit organization working to implement a holistic health program in elementary schools.

“We teach how to grow gardens, we teach how to cook, we have a healthy market, and we do fitness—soccer is our central fitness,” Katz said.

Katz hopes the tournament will grow and become something that can help sustain the Seeds in the Middle program for the children.

“We hope to go to something bigger as more people learn about it: international soccer in Brooklyn,” Katz said. “We want to build it up to something where we would have a series of games.”