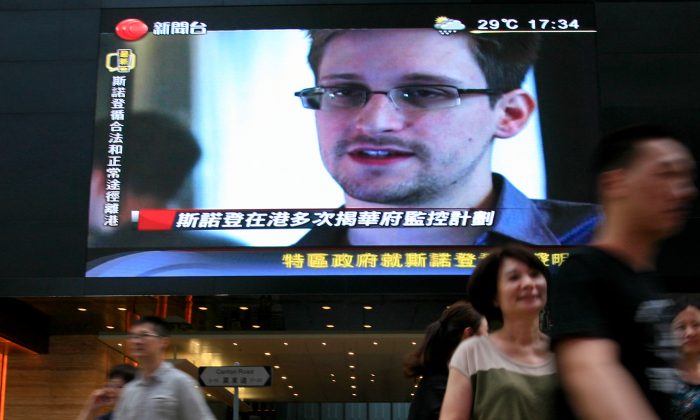 A TV screen shows a news report on Edward Snowden, a former CIA employee who leaked top-secret documents about U.S. surveillance programs, at a shopping mall in Hong Kong, June 23, 2013. Snowden was a hot potato in Hong Kong that the Chinese Communist Party has now palmed off, to the delight of Russia. (AP Photo/Vincent Yu)
China

Snowden and China: It Was Good While It Lasted

Before Chinese authorities let Edward Snowden, the former NSA contractor, out of Hong Kong, they made sure they had obtained all the intelligence he had.

A separate car carried his luggage to the Hong Kong airport for his flight to Russia, according to Sen. Dianne Feinstein, the chairman of Senate Select Committee on Intelligence, who spoke with CBS’s “Face the Nation” on Sunday.

Given the free maneuverability of People’s Republic of China intelligence agencies in Hong Kong and the strong interest that the PRC has in the intelligence that Snowden possesses, it is likely that any computer data he held fell into PRC hands.

Previous to the departure, Hong Kong received an extradition request from the United States, which the authorities chose not to obey after saying it was not filled out properly. This defiance was widely seen, including by U.S. politicians, as sticking a finger in America’s eye.

“I think it’s a very big surprise,” Senator Feinstein said. “I had actually thought that China would see this as an opportunity to improve relations and extradite him to the United States. China clearly had a role in this, in my view. I don’t think this was just Hong Kong without Chinese acquiescence.”

The White House, which is typically much more restrained in its public remarks about the PRC, expressed a similar sentiment.

“We are just not buying that this was a technical decision by a Hong Kong immigration official,” White House press secretary Jay Carney said to reporters at a daily news briefing on June 24. “This was a deliberate choice by the government to release a fugitive despite a valid arrest warrant, and that decision unquestionably has a negative impact on the U.S.-China relationship.”

“The Chinese have emphasized the importance of building mutual trust. And we think that they have dealt that effort a serious setback,” Carney continued. “If we cannot count on them to honor their legal extradition obligations, then there is a problem. And that is a point we are making to them very directly.”

Snowden flew to Moscow on June 23 and is thought to remain there. It is likely now that the Russians are also availing themselves of whatever intelligence he has.

Official U.S. statements since his arrival there have asked that Russia arrest Snowden and expel him to the United States, but the likelihood of compliance is low.

For the Chinese regime, hustling Snowden off to the Russians was one of the deftest ways of playing the situation, according to Shi Cangshan, an independent analyst of the Chinese Communist Party and its politics who is based in Washington, D.C.

“Xi Jinping just concluded two days of informal meetings with President Obama,” Shi said in a telephone interview. “It would have had a great impact on relations between the two nations if this incident intensified, and Xi Jinping hates to see it happen like that.”

“The Snowden incident could make everything he achieved from his trip to California go down the drain.”

Instead of sending Snowden back to the United States—which would be seen as a sign of weakness, and deter possible defectors in the future—sending him along to another country was the “least hassle,” Shi said.

“Actually, the Chinese Communist Party doesn’t quite dare to provoke the Americans.” And the United States is aware of this, Shi added. “That’s why Washington always stresses ‘face diplomacy’ with China, meaning you have to let China gain face as much as possible, and in return they will provide you something substantial.”

In this case, however, the PRC left Washington with very little face. During a previous high-stakes defection episode near the beginning of 2012, when Wang Lijun, the chief of police of the southwestern city of Chongqing, ran to a nearby U.S. consulate, the Americans let him go after a debriefing.

Snowden is understood to have landed at the Sheremetyevo Airport in Moscow on June 23—en route to another country not allied with the United States, such as Ecuador or Venezuela —but no one ever saw him there. Questions are now being raised about whether he arrived at all.