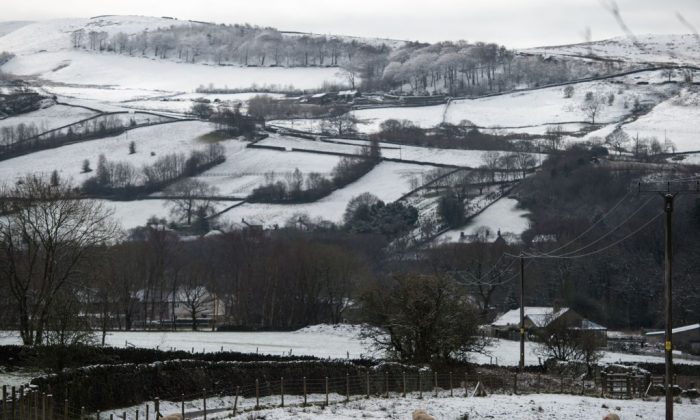 Snow covers the hills and fields surrounding the village of Hayfield in northern England, on February 28, 2017. Snowfall at the end of 2017 would also look very much like this. (Oli Scarff/AFP/Getty Images)
UK

With temperatures dropping fast in the UK, heavy snow is predicted for parts of the country.

By early Thursday morning, snow had already fallen in north-east England and northern Scotland, with many residents sharing photos of the snow on social media.

The Met Office has issued a yellow warning for snow, with the whole of the east coast of England likely to be affected.

The warning said: “Wintry showers will bring an additional hazard and may lead to 2-5cm of snow accumulating on ground above 100 metres, primarily over northern Scotland and north-east England.

“Some roads and railways are likely to be affected with longer journey times by road, bus and train services.”

Already 19 schools in Aberdeenshire, Scotland, have been closed according to the Guardian, and police forces across the UK have warned motorists to take extra care on icy roads.

The Met Office said that Thursday night going into Friday could be the coldest day of autumn so far.

“It would be isolated and more widely temperatures are likely to be between minus 4C and 2C so it will be a frosty start and there will be icy stretches,” they said, according to the Mirror.

“We are likely to see further warnings for ice tonight.”

London, too, experienced the first flakes of snow, although Twitter users seemed ambivalent about the prospect of wintry weather.

Met Office forecaster Helen Roberts said wintry showers would be likely in northern and eastern parts of the UK.

She told the Guardian: “As the showers push further inland by this afternoon and this evening, we could see them pushing as far inland as the Midlands, and it could turn to sleet and snow.

“There could be an accumulation but probably not a lot, like the North York Moors, where we have already got a few centimetres.

“Otherwise it will feel cold, with temperatures in the low- to mid-single figures.

“With the wind chill factor particularly it will feel quite a lot colder in some places. It will definitely feel sub-zero and a temperature of 3C (37F) could feel more like minus 3C.”