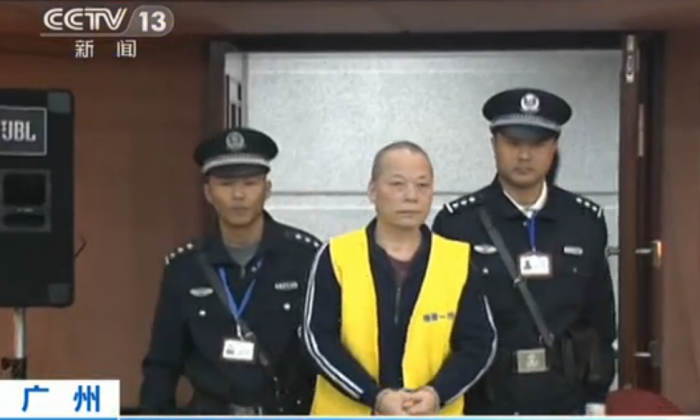 Chinese official Zhang Xinhua, former general manager of a state-owned company, is brought into court in Guangzhou of Guangdong Province, on Dec. 10, 2014. Zhang was sentenced to death for stealing tens of millions of dollars from the state. (Screenshot/CCTV)
China

Chinese authorities sentenced an official to death on Dec. 10 for embezzling and receiving in bribes an amount exceeding $55 million, according to state media.

Of the $55 million, over $46 million of it belonged to the state, the report said; it would make Zhang’s corruption a record in history of corruption in Guangdong Province.

This is exacerbated by the fact that Zhang was merely a low level official—the general manager of Guangzhou Baiyun Agriculture Industry Commerce Corporation, a state-run agency, from June 1998 to May 2013.

The court says Zhang didn’t voluntarily surrender, nor truthfully confess his crimes—which usually brings a lighter sentence. Due to his “particularly serious crime and great social harm,” and being the organizer and initiator of the theft, Zhang was sentenced to death, the reports said.

Zhang complained that the sentence was too harsh, and said he plans to appeal.