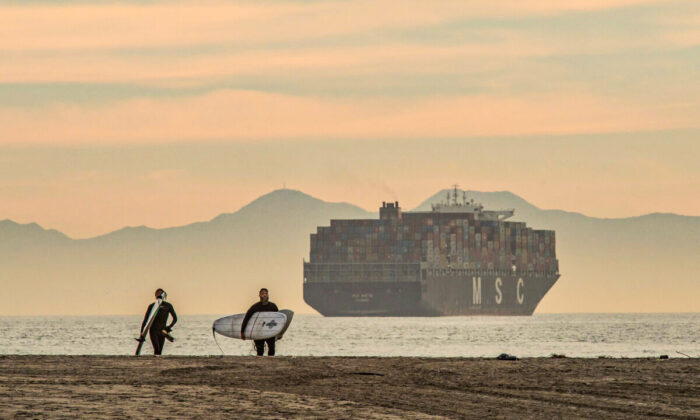 As the supply chain disruption continues, about half of all small businesses in the U.S. have been significantly impacted, according to the latest survey released by the National Federation of Independent Business (NFIB).

The NFIB Research Center found that small businesses in the nation are facing two major challenges—labor shortages and supply chain disruptions—which might continue to be a problem during the holiday season, according to NFIB chief economist Bill Dunkelberg.

With the ongoing port backlog in Los Angeles, the survey shows 48 percent of small businesses are experiencing supply chain disruptions, with 62 percent of them reporting worsening situations compared to three months ago.

The nationwide supply chain disruption has been affecting various goods, including holiday supplies and household products, according to Sandy Rosco, executive director of the San Gabriel Chamber of Commerce.

With more than 100 cargo ships stranded at sea, small and medium-sized businesses will be hit hard, Rosco said.

David Chuc, a lighting store owner in Arcadia, California, is experiencing delivery delays for the Christmas lights he ordered in preparation for the holiday season.

“I’m still waiting for things to come in,” Chuc told The Epoch Times. “I usually have to pay a lot more [for things] to get here faster.”

He said the shipping cost has doubled from around 7 cents to 16 cents per ounce.

Jillian Wahlquist, vice president of toy store chain Tom’s Toys, told The Epoch Times all of her stores are in good shape so far, with only a few products low in stock.

Wahlquist has been telling her customers to purchase products sooner rather than later because the delivery delay has been worsening.

“It’s taking longer on every, every stage of the supply chain to get products in,” Wahlquist said. “Certain categories that we’ve really never seen shortage on before we’re definitely seeing shortages now.”

On top of the supply chain disruptions, 76 percent of small business employers are experiencing different degrees of staffing shortages, according to the survey.

In response to labor shortages, 79 percent of business owners have increased starting wages to incentivize the unemployed to get back to the workforce, reported by the survey.

In addition to the wage increase, some employers are also offering more incentives including health insurance and hiring and referral bonuses.

California state director of NFIB, John Kabateck, said he believes all the challenges these small business owners are facing will ultimately slow down job growth in California.

“Unfilled job openings, supply chain disruptions, inflation, a congress threatening more taxes add up to a bleak outlook for the nation’s and California’s leading job-creators,” Kabateck said in a statement.