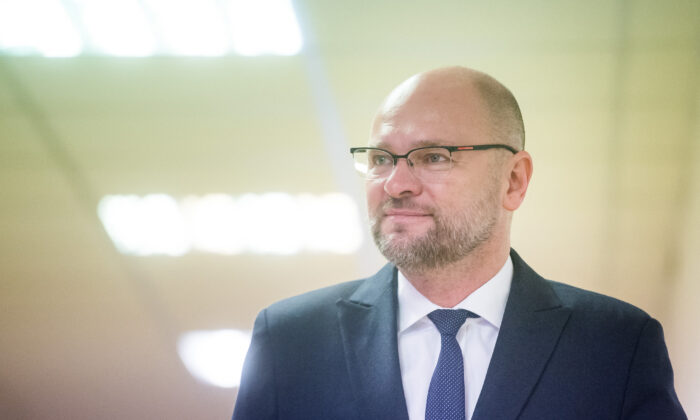 Richard Sulik, leader of Freedom and Solidarity (SAS), arrives for a televised debate following the results of the country's parliamentary election in Bratislava, on March 1, 2020. (Vladimir Simicek/AFP via Getty Images)
Europe

Slovakia Walks Back Suggestion It Might Agree to Russian Ruble Demand

Slovak Prime Minister Eduard Heger has stated his country’s insistence on continuing to make energy payments in euros, after a minister of his government suggested that the country would remain open to obliging the Russian government’s demand that energy payments from “unfriendly countries” must be made in the Russian currency.

In a Facebook post, Prime Minister Heger assured readers that Slovakia would proceed in line with the terms of the European Union when purchasing gas from Russia, insisting on the terms of preexisting contracts which stipulate that energy payments will be made in euros.

“In this situation, unity is key and we insist on respecting contract conditions and payments in euros.”

The European Commission has instructed companies whose contracts with the Russian government stipulate payments in euros or U.S. dollars not to comply with Russian President Vladimir Putin’s demands.

The prime minister’s comments come after backlash to remarks made by Slovak Economy Minister Richard Sulik, who stated that it was essential for Slovakia to continue to receive fuel imports from Russia, even at the cost of doing business in that country’s currency of choice.

“The gas must not stop,” said Sulik on Sunday during a public television debate show. “If there is a condition to pay in roubles, then we pay in roubles.”

The brief controversy is a reflection of Slovakia’s unique dependence on Russian energy imports, which place the small Central European country in a tight spot as the European Union rallies its members to sanction the Russian state. Slovakia imports 87 percent of its natural gas and two-thirds of its oil from Russia, and the economic minister’s fears of what would happen in the event that this supply is cut off are not unfounded.

The anxieties of Slovakia are a particularly acute instance of the fears and tribulations which confront the European Union more broadly, as the Western bloc prepares to face the consequences of cutting off the Russian energy supply if Putin enforces his ultimatum that all gas payments must be made in rubles.

Widely seen as an effort to prop up the Russian fiat currency after economic sanctions caused the ruble to plummet, Putin’s demand has drawn criticism from officials within the EU, who claim it is a violation of the contracts established with the Russian government that allow energy payments to be made in the fiat currencies of the European Union or the United States.

Since Putin’s announcement, the ruble has rebounded to nearly pre-invasion levels, with a current value of 84.25 per U.S. dollar (on February 24th, the day Russia initiated its invasion of Ukraine, the ruble was valued at 84.95 per U.S. dollar).

As of April 4, gas continues to flow through European pipelines despite the European Union’s refusal to comply with Russian demands to pay in roubles. With the cold months quickly receding, Putin’s leverage on fuel prices is somewhat lessened in the short term. However, European consumers have faced highly inflated energy costs in the months since Russia invaded Ukraine, and for those countries which are particularly dependent on Russian fuel imports such as Slovakia, the economic costs will be particularly acute unless arrangements are made to facilitate alternative sources of energy in short order.