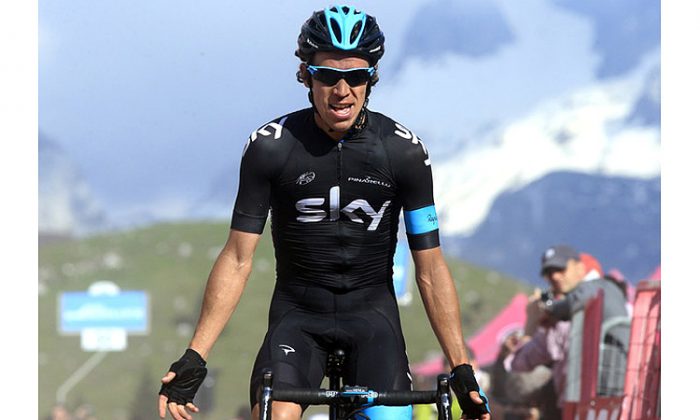 Sky’s Rigoberto Uran attacked halfway through the steep Cat One climb to the finish line of Stage Ten of the 2013 Giro d’Italia and persisted to take the stage win. (www.teamsky.com)
Cycling

Rigoberto Uran, riding the Giro d’Italia to support team mate Bradley Wiggins, may find himself in the leadership position after his strong attack on the Way to Stage Ten’s summit finish vaulted him to third in the General Classification.

“I’m very happy to have taken the win today. It is the first win for me in a Grand Tour and it is very satisfying after getting so close before. It’s nice to finally be able to finish off a victory,” Uran said on Sky’s website.

“It is doubly special as it came after such a strong ride from the team. It was always the plan for me to attack on the climb and things went to plan. The team rode incredibly all day.

“The result has meant I have jumped up a few positions on the general classification so now I am one second in front of Brad. That is a good position to be in for me and for the team to have two riders there.

“There is still such a long way to go in this Giro but today we showed that we have one of the strongest teams in the race, if not the strongest.”

The Colombian climber made his move with eight km left in the stage, halfway up the closing Cat One climb to the summit finish in Montasio. None of the GC contenders chased him, assuming he would burn out before the finish, but the 26-year-old Uran had plenty of legs left after helping lead the peloton over the day’s two Cat One climbs. He crossed the line with a 20 second-lead over second place, and 31 seconds ahead of racer leader Vincenzo Nibali of Astana, who took third. Uran won 20 bonus seconds which moved him from ninth to third in GC.

Ag2R’s Domenico Pozzovivo was the only rider to try to respond to Uran’s move, but fell back to the peloton once he hit the 20-percent gradient in the final few kilometers of the climb. Pozzovivo’s team mate Carlos Betancur, another Colombian climbing specialist, attacked a few hundred meters later, just before the slope dropped to a more tolerable six percent. He couldn’t catch the Sky rider, but did take second and a 12-second bonus seconds.

Vincenzo Nibali rode a very smart stage, saving his energy for a final dash near the finish to take third and its eight bonus seconds. He didn’t waste energy trying for a stage win; he gained time on his most dangerous rivals, and saved some legs for the mountain stages coming up later in the week.

BMC’s Cadel Evans made a very strong showing, staying up front throughout the stage and contesting the final posium position. He lost out so Nibali and Vini-Fantini’s Mauro Santambrogio in the closing several hundred meter and finished fifth, but stayed third in GC.

Will Sky Ride for Wiggins or Uran?

Sky’s Bradley Wiggins apparently didn’t get enough rest on the rest day. His team protected him as far as they could, but when the final climb reached 12 percent in the final eight kilometers, the erstwhile Sky team leader couldn’t keep up with the few dozen riders still in the peloton.

What this means for Wiggins’ Giro aspirations, and his role as the Sky leader, are not known. After a good ride in the time trial and a less-than-good performance in the next day’s medium mountain stage, Wiggins told the press he was still optimistic and very much in the race. Will he still, after today?

Possibly his mediocre Stage Nine performance could have put down to tired legs from the TT the day before. Possibly his poor showing in Stage Ten can be attributed to his reaction to the prior rest day. But how many days can the 2012 Tour de France and Olympic champion write off due to excuses and still keep his place at the head of the Sky squad?

Wiggins is only one second behind his team mate Rigoberta Uran, but Uran has looked strong in every stage; Wiggins, not so much.

Has Sky already handed the leader’s mantle to Rigoberto Uran? Was his attack in Stage Ten a sign that Sky would no longer depend upon Wiggins to carry its banner? Or was that an opportunistic move, decided on after it became clear Wiggins was not up to the task on this day?

Rumors that Rigoberto Uran wouldf ber leaving Sky after this season werte circulating even before the Girto started. The 26-year-old Colombian saw himself fourth behind Wiggins, Chris Froome, and Ritchie Porte in the Sky hierarchy, and he felt he could do more. Maybe Sky can keep him by letting him lead a Grand Tour, but what, then, for Wiggins?

Another powerful GC contender to not make the cut in Stage Ten was 2012 winner Ryder Hesjedal. After looking very racy in stage one, the Garmin-Sharp rider has been unable to follow the leaders on every climbing stage.

Hesjedal cracked on the first climb of Stage Ten; his day was done thirty kilometers before the final climb started. Now 33rd overall, 23:45 off the pace, the Garmin leader might as well go home and rest. He has no chance of even making the top ten in this year’s Giro.

Stage Eleven, 182 km from Tarvisio to Vajont, will be an easier version of Stage Ten: it too has a serious climb followed by a summit finish, but both are Cat Twos. Look for the same sort of action offered by Stage Ten, except with bigger groups of riders on both climbs, as the gentler slopes should make less of a selection.