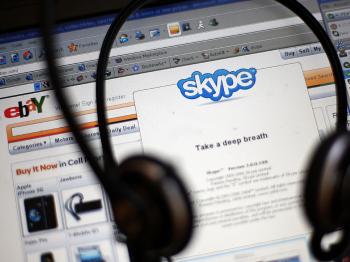 eBay bought and then sold a little more than half of Skype, the Internet chat service, for a little less than half the purchase price. (Mario Tama/Getty Images)
Business & Economy

Antonio Perez
View profile
Follow
biggersmaller
Print
Skype SA, the popular telephone and web-chat program maker, has filed an initial public offering (IPO) in the United States to raise $100 million in capital, according to a filing with the U.S. Securities and Exchange Commission.

The Luxembourg-based company was owned by web auction firm eBay Inc. since 2005, but eBay sold the majority stake in the company to a consortium of investors led by Silver Lake Partners for $2 billion in September 2009.

According to the company, Skype became the largest carrier of international calls last year. Its SEC filing stated that it has lost money in four out of its last five years.