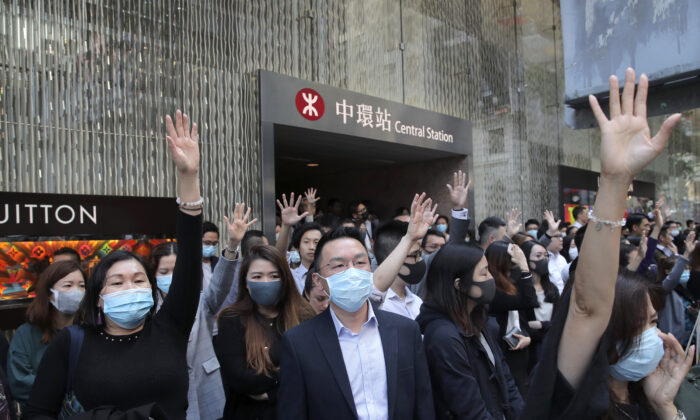 The Chinese regime pledged to take measures to retaliate immediately if a U.S. bill supporting Hong Kong protesters is signed into law.

On Nov. 19, the Hong Kong Human Rights and Democracy Act passed the Senate floor unanimously. The bill would require the U.S. Secretary of State to certify each year whether the city is “sufficiently autonomous” from mainland China to justify its special trading status with the United States. The House passed its version of the bill last month.

Since Hong Kong reverted to Chinese rule in 1997, under the express guarantee that its autonomy be preserved, the United States has dealt with the city as a separate entity from mainland China in matters of trade, investment, and immigration.

The following day, the House voted in favor of the Senate version of the bill, sending it to President Donald Trump to sign into law or veto.

Hong Kong’s pro-democracy protesters have widely considered the bill a form of economic pressure for the Hong Kong government and Chinese regime, which relies on the financial hub as a source of foreign reserves and investment capital.

They have raised U.S. flags during marches and rallies, urging Congress to pass it.

China’s foreign ministry spokesperson, in a Nov. 20 press release, accused the United States of being “blinded” to the wellbeing of Hongkongers.

Geng called on Washington to “immediately take measures to prevent this act from becoming law.” And if the United States does not stop “interfering” in Hong Kong, Geng warned that “negative consequences will boomerang on itself” and China would have to take “strong countermeasures to defend our national sovereignty, security, and development interests.”

Meanwhile, the Hong Kong Liaison Office, the representative agency of Beijing located in Hong Kong, said the regime “must take strong measures to resolutely fight back.”

The statement follows the Chinese Communist Party’s (CCP) consistent narrative that the Hong Kong protests are fomented by foreign countries.

Yang Guang, spokesperson for the Hong Kong and Macau Affairs Office—Beijing’s highest office for managing the affairs of the two former European colonies—accused U.S. lawmakers of “openly supporting rioters” in Hong Kong, according to a press release, using its typical language to describe protesters.

The Hong Kong government also responded to the bill, saying it expressed “deep regrets” and that the bill was “unnecessary and unwarranted.” It added that “foreign legislatures should not interfere” in the city’s internal affairs, according to a statement.

Meanwhile, U.S. lawmakers saw the legislation as a key measure to censure the Chinese regime.

Sen. James Risch (R-Idaho), who also chairs the Senate foreign relations committee, said in a statement: “Passing this legislation is an important step forward in holding the Chinese Communist Party accountable for its erosion of Hong Kong’s autonomy and its repression of fundamental freedoms.”

Stating that the Senate has taken a “momentous step” in standing up for democracy and human rights around the world, Sen. Bob Menendez (D-N.J.) called on Hong Kong authorities to “address the democratic desire of the Hong Kong people—including forming an independent commission to investigate police violence.”

Chu added that both the Senate and House versions of the bill “contain the necessary tools and ingredients for a more robust U.S. defense of Hong Kong’s autonomy and human rights.”

Chu suggested that the Hong Kong bill be attached to both houses’ Armed Services Committees annual defense spending bills under the National Defense Authorization Act (NDAA) as one of the quickest ways to get the bill to Trump’s desk.

Hong Kong pro-democracy party Demosisto thanked everyone in Hong Kong and Washington for their hard work in passing the Senate bill.

Joshua Wong, activist and the iconic figure from the 2014 Umbrella Movement, urged Trump to sign the bill to support Hong Kong protests. “Human right should never be override [sic] by the trade deal,” Wong tweeted.

Some Chinese netizens were also supportive. “Phoenix9heavens” tweeted that the Senate’s bill passage was “a great moment!”

Uygurtimes commented: “The bill arrives after Hongkongers have risked their lives.”

Nicole Hao
Follow
Nicole Hao is a Washington-based reporter focused on China-related topics. Before joining the Epoch Media Group in July 2009, she worked as a global product manager for a railway business in Paris, France.
More articles from this author
China Offers $23,000 for a North Korean Jailbreaker
sharecomments
Eight Chinese Diagnosed With COVID-19 in Region Claimed by Authorities to Be Virus-Free
sharecomments
In Beijing’s Fight With Taipei, 11 Pacific Trade Pact Countries Will Decide the Winner
sharecomments