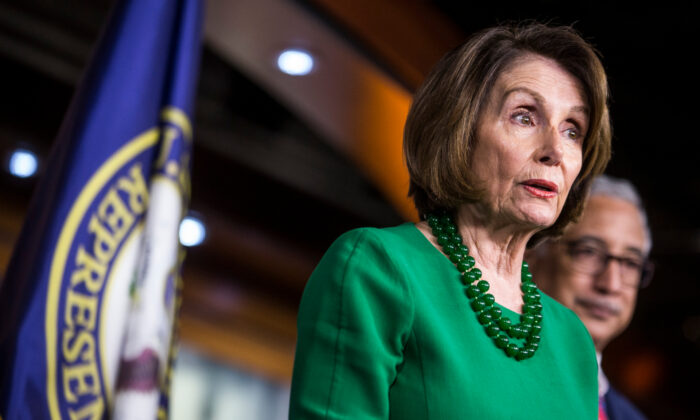 The U.S. House of Representatives on Oct. 15 unanimously passed a series of measures expressing support for the ongoing pro-democracy movement in Hong Kong against Beijing’s encroachment.

“If America does not speak up for human rights in China because of commercial interests, then we lose all moral authority to speak out for human rights anyplace in the world,” Speaker of the House Nancy Pelosi (D-Calif.) said.

Lawmakers passed two bills: the Hong Kong Human Rights and Democracy Act, which would require the U.S. administration to review each year whether the city should retain its trading privileges; and the Protect Hong Kong Act, which would ban the export of crowd control equipment to the city, where police have been accused of using excessive force to quell demonstrators.

The House also passed a resolution that condemns interference in Hong Kong from the People’s Republic of China.

The bills have to be passed in the Senate and signed off by the president before it will become law.

For over four months, Hong Kong has been rocked by large-scale mostly peaceful protests in opposition to a now-withdrawn extradition bill that would have allowed people to be transferred to the mainland for trial in courts controlled by the Chinese Communist Party, but have since morphed into wider calls for democracy and universal suffrage.

Pelosi called lawmakers from both sides of the aisle to stand united in supporting Hongkongers’ fight against the regime’s growing influence.

“Beijing thinks that they can rule because of money … What does it profit a person if he gains the whole world and suffers the loss of his soul?” She said, adding: “We do not want to lose the soul of our country for commercial interests.”

Rep. Brad Sherman (D-Calif.) said the Hong Kong Human Rights and Democracy Act would “reflect what is happening on the ground today” and show Beijing that “it cannot undermine the city’s freedom while expecting America to still give … preferential trade arrangements.”

Since Hong Kong reverted to Chinese rule in 1997, the United States has treated Hong Kong as a separate entity to the mainland in areas such as trade and investments.

The Act would require the U.S. Secretary of State to certify each year if the city is “sufficiently autonomous” to justify such special treatment.

It also contains provisions that would compel the U.S. administration to impose sanctions on Chinese and Hong Kong officials responsible for the extradition of any individual in Hong Kong to mainland China, as well as those responsible for their “arbitrary detention, torture, or forced confession” while in the mainland.

Rep. Chris Smith (R-N.J.), who sponsored the bill, called the Act a “blueprint for meaningful action.”

“The [people] of Hong Kong deserve better than the brutality so many endure [and] the systematic violations of their universally recognized human rights,” Smith said on Twitter.

Sherman said the United States needs to “make sure our policy is brought up to date so it can match the challenges of the relationship today.”

Earlier in the day, about 130,000 Hongkongers poured into the Chater Garden in the city’s downtown, urging U.S. congressional lawmakers to pass the Act to send a strong message to Beijing.

Displaying a photo of the rally, Rep. Jim McGovern (D-Mass.) said he was proud to see the United States stand with Hong Kong in “their struggle to secure a democratic future.”

“It’s time we put the Chinese government on annual notice that future erosion of autonomy or a crackdown will cause the city, which serves as an important financial haven for wealthy Chinese elites, to lose its special economic, financial, and trade arrangement with the United States,” he said.

Dan Garrett, author of “Counter-hegemonic Resistance in China’s Hong Kong: Visualizing Protest in the City,” said if the Act is passed, it could diminish “foreign confidence in Hong Kong’s ability to remain or function as an international financial center.”

“Uncertainty regarding China’s and … [Hong Kong’s] economy will significantly increase as will the cost of doing business,” Garrett told The Epoch Times in an email.

He noted the specific consequences of the Act would depend on how the U.S. administration wishes to proceed. For instance, rather than stripping away trade privileges for all businesses in Hong Kong, it could specifically target companies linked to the Chinese Communist Party and Chinese state-owned enterprises operating in the city, thereby reducing the Act’s impact on ordinary Hongkongers, Garrett said.

Gordon Chang, China expert and author of “The Coming Collapse of China,” said passage of the Act would be considered by Chinese officials as a “public humiliation.”

“[The] enactment would show that Washington does not particularly care what Chinese leaders think,” Chang told The Epoch Times in an email. “The real story here is China has lost support in America.”

Both Hong Kong and Beijing authorities have objected to the U.S. bills, saying it amounted to unacceptable foreign influence in the city’s internal affairs.

Earlier the same day, embattled Hong Kong leader Carrie Lam ruled out making any concessions to pro-democracy protesters in the face of escalating violence, while condemning “rioters” for their actions, including throwing petrol bombs at the police vehicles and arson attacks on the offices of pro-Beijing lawmakers.

Also on Tuesday, Randall Schriver, a senior U.S. defense official for Asia, said that while the United States was concerned about some of the tactics used by protesters, it was also concerned about the heavier handed response by Beijing and Hong Kong authorities.

“Certainly we have some concern about some of the tactics that the protesters have been using and may use, and I think in single instances where that becomes a real problem we would point that out,” he told a conference organized by the Jamestown Foundation, a Washington-based research institute.

“But I think in general, we are concerned about the heavier hand that Beijing has taken and the Hong Kong authorities have taken with what we regard as legitimate activities on the part of the people of Hong Kong.”

He said the Hong Kong police and authorities had historically acted to uphold the law and the territory had a very good judicial system.

“What we are concerned about is the heavier hand from Beijing and how that can be distorted and turned into something more repressive,” Schriver said.

“The general trend is concerning, that we’re seeing less autonomy, more influence from Beijing, heavier hand from the authorities there, and in general an erosion of the things that were promised the people of Hong Kong.”

Cathy He and Frank Fang contributed to this report.