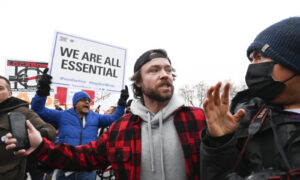 ‘Go Ahead and Do It’: Restaurant Owner Urges Small Businesses to Open After Being Released on $50,000 Bail
0
Share Now
FacebookTweetParlerEmail
Copy Link 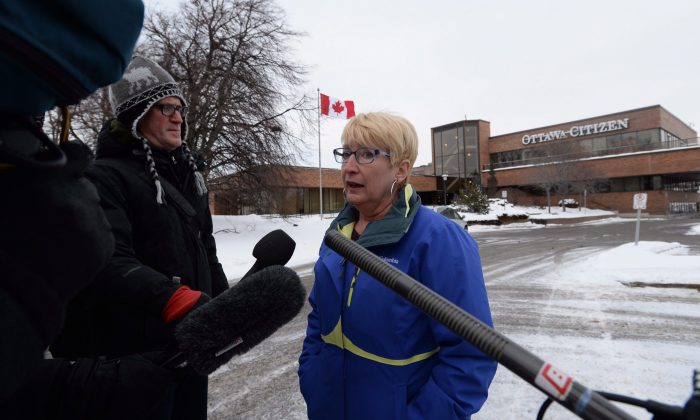 Debbie Cole, president of the Ottawa Newspaper Guild, speaks to reporters outside the offices of the Ottawa Citizen and Ottawa Sun on Jan 19 after Postmedia announced it was cutting approximately 90 jobs and merging newsrooms in four cities in an effort to slash costs amid mounting revenue losses. (THE CANADIAN PRESS/Sean Kilpatrick)
Canada

A study of Canada’s newspapers began with bleak testimony in Ottawa on Tuesday, Feb. 23, as MPs heard that 22 daily newspapers have closed over the past five years.

Parliament’s heritage committee is examining the future of news in the country and calling officials and experts to testify to the problems in the industry.

Community newspapers have stayed relatively stable at about a 1,000 across the country. These papers mainly focus on print. Daily newspapers, however, have declined by about 15 percent in the last five years, said Bernier.

The committee will hold 10 hearings on media-related issues in response to those closures, particularly following recent events that have seen Canada’s newspaper landscape change dramatically.

Those changes include Postmedia’s purchase of Sun Media’s English-language news—some 175 newspapers and digital publications. Since then, lay-offs have followed and newsrooms of many of the previous competing newspapers have been merged together.

It’s not the first time Parliament has studied the issue.

A 1980s Royal Commission chaired by Tom Kent, a former newspaper editor, examined closures of newspapers owned by competing companies Southam and Thomson Corporation, where each closed a paper in one city, gaining a monopoly in another.

Those in the industry are watching the new study. The previous Royal Commission did not result in significant changes. Since then, the market has become more competitive and concentration has increased.

“This is a problem across the board for all local news and journalists,” said John Hinds, CEO of Newspapers Canada, in a phone interview.

“In a lot of communities, the newspaper is the only creator of local news.”

Newspapers Canada, the national association of daily and community newspapers, has not yet appeared before the committee, but Hinds said he is closely watching the proceedings.

Part of the challenge is that Canadians are not following news as closely as they used to.

The number of Canadians who report following news and current affairs daily declined from 68 percent in 2003 to 60 percent in 2013, according to a recent report by Statistics Canada.

In January, the Canadian Radio-television and Telecommunications Commission began hearings on television programming, specifically local news and affairs for communities to address. The CRTC estimates $470 million was spent in 2014 by local television stations on local news and local programming.

“An alarming number of television stations have reduced the length of their newscasts, cut back on staff, or centralized the production of their news programming,” Scott Hutton, executive director of broadcasting at the CRTC, told MPs.

“That’s in large part because of declining advertising revenues. Data collated by the Commission indicates the cost of producing local news television content was 22 percent higher than revenues in 2015,” added Hutton.

A Statistics Canada analysis said most Canadians reported that they follow news and current affairs by watching television. In contrast, only 51 percent follow the news using print, while 59 percent report using the Internet. Internet use as the source for news increased nearly 30 percent between 2003 and 2013.