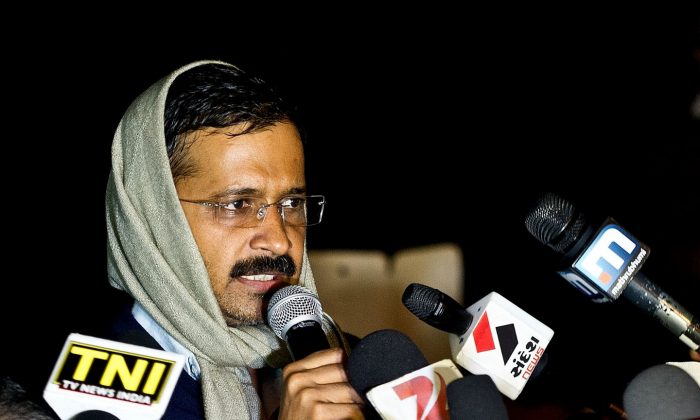 Kejriwal stayed overnight Monday and all day Tuesday in the open near the Parliament house with his entire Cabinet of ministers. In retaliation, the Delhi police closed all nearby roads and four city railway stations around the protest site.

The protest ended in the national authorities agreeing to take action against the police who refused to arrest those involved in a dowry harassment case, and a sex and drug trafficking ring.

The volley of accusations between Delhi police and the Delhi government started after the gang rape of a 51-year-old Danish tourist in New Delhi on Jan. 14.

Kejriwal has severely criticized the Delhi police, characterizing it as a “highly compromised” force, according to New Delhi Television (NDTV). He wants control of the police transferred from the national government to the state government.

“If you don’t arrest drug and sex offenders … this is where tendencies of rape begin,” he said.

A phenomenon in India only since 2012, the Common Man Party, also known as “Aam Aadmi” Party, formed a government in Delhi last year with support from the Indian National Congress. It emerged from the election with 28 of 70 seats. It leads a minority government, where it continues to test its tenet that the government is accountable to the people.

“We are protesting to demand accountability from the Delhi Police. They need to do more than just investigations. They need to act on complaints filed by residents, and not collude with criminals. The culture of bribes has to stop,” said a Monday post on Kejriwal’s Facebook page.

Sit-In Snarls Traffic
In retaliation for the protest, the Delhi police closed all nearby roads to the public, and four city railway stations around the protest site.

In addition to the road and train station closures, signs were posted at all city stations informing of the closures. At Yamuna Bank, the station linking Delhi with the adjoining state Uttar Pradesh, audio announcements were made telling people that the Delhi police ordered the closure of specific stations from Tuesday 6 a.m., until further notice.

Frustrations were clearly visible among the commuters. “I voted for Common Man Party. What Kejriwal is doing is right, but this can be problematic as there are security concerns, and the Indian Mujaheedin (a Muslim militant organization) has also threatened to kidnap him,” said Sohan Singh, an auto rickshaw driver working near India Gate.

Access to India Gate was also closed. “These barricades put as preparations are happening for Republic Day celebrations on Jan. 26,” a policeman standing at barricades at the intersection of Ashoka and Rajpat roads said. They refused to acknowledge any protest happening nearby, and said barricades had been put up for Republic Day, an Indian national holiday.

However, just a quarter mile away, at Hyderabad House, where many policemen were stationed for a Republic Day celebration, a policeman acknowledged the protest.

“There’s an anshan (protest) happening around by Arvind ‘ji,’” he said.

The policeman referring to Kejriwal as with the suffix “ji” suggests the wider public support that the leader enjoys. Indians use ‘ji’ for elders, and those whom they respect.

Just around the corner, a beggar in tattered clothes walked down a footpath wearing a Common Man Party cap displaying a faded image of a broom (the party’s symbol), and the words, “I’m also Aam Admi (Common Man).”

Many people heavily condemned the protest due to security threats and the traffic disruption involved.

There were also reports that protesters from the Common Man Party broke barricades and pelted policemen with stones. However, party leaders denied the violent protesters were party members.

As the protest was called off, Kejriwal vowed to keep fighting for the transference of control over Delhi police from the national government to the state government.

“If women’s safety is ever jeopardized, we will not hesitate to fight again” he said, according to an NDTV report.

CORRECTION: An earlier version of this article incorrectly stated the impetus for Kejriwal’s sit-in protest. It was only over the police refusal to arrest those involved in a dowry harassment case, and a sex and drug trafficking ring. An earlier version of this article also incorrectly defined the Hindi words “Aam Aadmi.” The correct translation is Common Man. Epoch Times regrets the error.