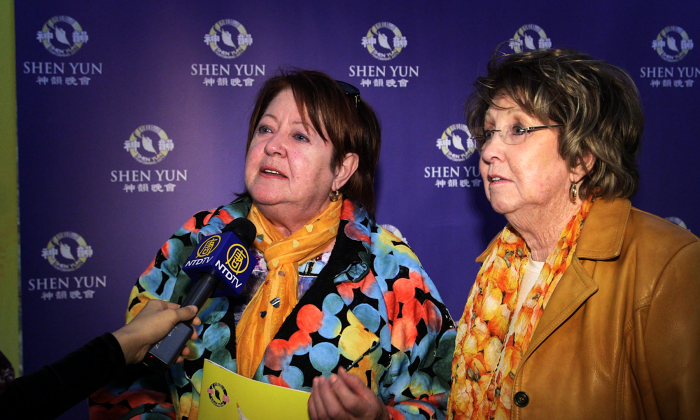 Sisters Louise-Marie Poulin and Jacynthe Poulin took in Shen Yun at Grand Théâtre de Québec in Quebec City on May 3, 2016, and were deeply touched by the performance. (NTD Television)
Canada

Sisters Transported by Shen Yun: ‘I feel sad to leave the theatre’

QUEBEC CITY, Canada—Seeing Shen Yun for the first time was an emotional and profound experience for sisters Louise-Marie Poulin and Jacynthe Poulin, who took in the performance at Grand Théâtre de Québec on May 3.

“At the end of the show I felt sad to leave the theatre. I would have liked to watch it again, continuously,” said Jacynthe, who drove for over an hour to attend the performance. “I would be willing to come right back tomorrow morning.”

“We were transported,” added Louise-Marie. “I was so impressed.”

“I had the privilege this evening to attend an extraordinary sight. I have no words to describe it, but I tell you that two eyes and two ears are insufficient to [take in] this magnificent spectacle,” said Jacynthe.

She was particularly touched by the beautiful depictions of nature displayed in Shen Yun’s dances and animated digital backdrops, especially in the dance “Fairies of the Sea.” This piece depicts delicate fairy maidens dancing with silken fans, evoking rippling waves on the surface of the water. Ancient Chinese legend said that only those who were pure of heart could see the sea fairies.

“I found the water, the rain, the trees—incredible,” said Jacynthe. “The special effects were amazing.”

“I loved all the performances,” added Louise-Marie. “From one [dance piece] to another, it was a charm.”

In ancient China, a deeply held belief was that man should live in harmony with heaven and in accordance with universal laws. In Shen Yun, every detail—from the costumes and backdrops to the musical lyrics and dancers’ movements—are designed to express these deep values from the traditional Chinese culture.

Louise-Marie was touched by the lyrics of the songs sung by Shen Yun’s bel canto operatic performers and their rich philosophical reflection about life.

“The words of the songs touched my heart,” said Louise-Marie. “[They contained] principles of life that everyone should apply, and gave hope—hope to continue.”

“There were some beautiful messages,” said Jacynthe, who said she was brought to tears by the singing.

The spiritual values expressed in Shen Yun such as compassion, loyalty, and goodness are universal, and for all ages, she said.

“It touches the values within us … the words that were said were full of meaning. I think we must also record the lyrics and live them emotionally.”

The sisters strongly recommended the show, saying it was a precious opportunity.

“I invite everyone to come and see this great show, amazing,” said Jacynthe.