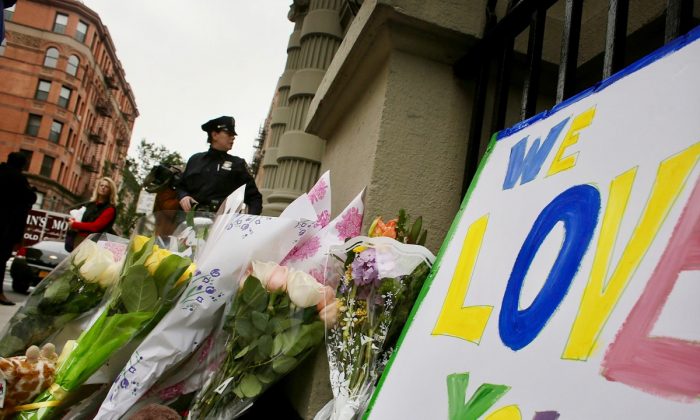 Flowers and messages are left in front of the building where two children were stabbed to death allegedly by their nanny in the family's quiet Upper West Side apartment, on Oct. 26, 2012 in New York City. (Spencer Platt/Getty Images)
Crime and Incidents

The sister of a woman accused of stabbing to death two children in her care has testified on the sister’s behalf on March 19. She said that her sister needed a vacation.

Yoslyn Ortega was charged with two counts of first-degree murder.

At the time of the murder, Kevin Krim, the children’s father, was travelling and the mother, Marina Krim, was at a swimming class with her third child, Nessie.

Ortega’s older sister, 64-year-old Miladys Garcia, told the court that the Krims should never have left Ortega alone with the children.

“Why didn’t those parents realize and take her out themselves — they were seeing it,” Garcia told the court, via New York Post.

“So the Krims should have seen her unraveling and given her vacation, is that what you’re saying?” Assistant District Attorney Stuart Silberg asked Garcia, via the New York Post.

“Yes, because they were the ones seeing her,” Garcia replied. “Give her a vacation if you see she’s losing weight, say, ‘Yosie, you’re not yourself.’ Even a week of vacation. Say, ‘Go, Yosie, you’re very thin.’”

The prosecutor had asked Garcia earlier why she hadn’t acted when her sister called her just hours before the murder, the New York Post reported.

Garcia had said Ortega sounded troubled. “The way I spoke to her, I know her voice,” she said during cross-examination, via the Daily News. “It was like I was talking to a demon. She had become something evil.”

Garcia said she heard Ortega grinding her teeth over the phone and speaking oddly. She told her sister she should seek psychiatric help or see a priest, according to the Daily News.

“I wasn’t seeing her. I was hearing it over the phone,” Garcia said to the court, via the Daily News. “I didn’t think it was that serious.”

Ortega pleaded not guilty. Her lawyers are mounting an insanity defense.

Ortega faces life in prison if convicted of first-degree murder. If she is found not guilty due to mental issues, she is likely to spend life at a psychiatric institution, the Post reported.

Yoslyn Ortega was the part-time nanny who assisted Manhattan mom Marina Krim in the care of her three children.

On Oct. 25, 2012, Marina Krim couldn’t find her 6-year-old daughter at a dance class. Instead, she found her daughter and 2-year-old son dead in the bathtub when she returned home with her 3-year-old. Ortega was also there, having unsuccessfully tried to commit suicide, NTD reported.