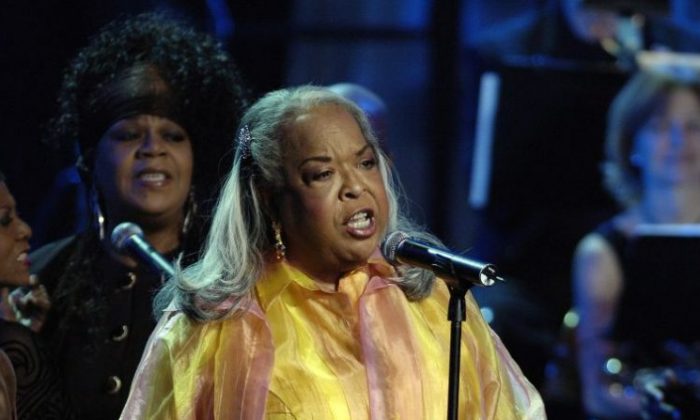 Singer Della Reese, of ‘Touched by an Angel’ Fame, Dies at 86

“Touched By an Angel” actress and gospel singer Della Reese died at age 86, according to reports on Monday.

Reese leaves behind her children, James, Franklin, and Dominique, as well as her husband Franklin Lett.

“On behalf of her husband, Franklin Lett, and all her friends and family, I share with you the news that our beloved Della Reese has passed away peacefully at her California home last evening surrounded by love. She was an incredible wife, mother, grandmother, friend, and pastor, as well as an award-winning actress and singer. Through her life and work she touched and inspired the lives of millions of people,” Roma Downey, her “Touched By an Angel” co-star, told People magazine.

“She was a mother to me and I had the privilege of working with her side by side for so many years on ‘Touched By an Angel.’ I know heaven has a brand new angel this day. Della Reese will be forever in our hearts. Rest In Peace, sweet angel. We love you.”

Della Reese, music legend and "Touched By an Angel" star, is dead at 86, her family confirms. pic.twitter.com/ccIAqClbpm

CBS, which aired “Touched By an Angel, issued a statement after her death.

“For nine years, we were privileged to have Della as part of the CBS family when she delivered encouragement and optimism to millions of viewers as Tess on ‘Touched By An Angel,’ ” CBS said, reported Variety magazine. “We will forever cherish her warm embraces and generosity of spirit. She will be greatly missed. Another angel has gotten her wings.”

Della Reese was such a warm, kind and generous person. I got to know her on the set of "Touched By An Angel" and enjoyed talking with her several times since. My thoughts and prayers are with her family as they mourn her passing. https://t.co/OHDzY5fS7U