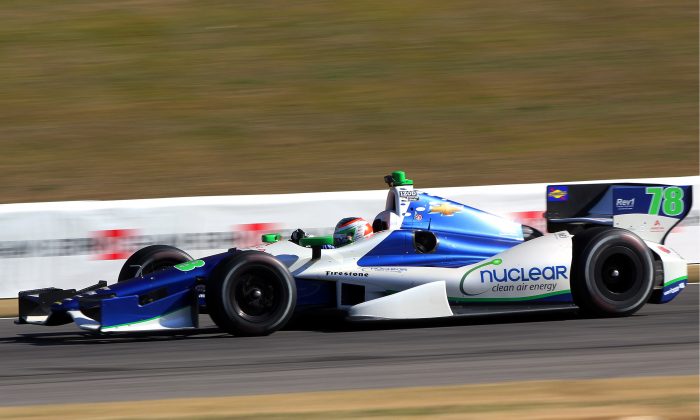 After three years of struggling with bad luck, a bad motor, and a few bad crashes, Simona di Silvestro has finally shown the kind of form which earned he an IndyCar ride in the first place. Di Silvestro, driving for KV Racing, finished second in the first of two Shell and Pennzoil Grand Prix of Houston races Saturday afternoon after qualifying fifth Saturday morning.

“We’ve been waiting for a long time for this podium, and everybody, all my sponsors that have been supporting me for all these years, it’s really cool that we can be together and celebrate this,” di Silvestro told the post-race press conference on IndyCar.com.

“All the junior series I’ve been in, I’ve been able to win races—that’s how I kind of earned my way into IndyCar. I think the last three years we’ve been fast, but it seemed like we never really could get it together or we had a bad pit stop or something didn’t go our way.

“I think I’ve learned a lot how to manage a race now, and I think that’s really important. I feel like everything is kind of really starting to come together.”

The 25-year-old Swiss driver joined IndyCar in 2010 after impressive runs in Formula BMW and Formula Atlantic. She landed with the underfunded HVM team, but made a decent show of it, earning Indianapolis 500 Rookie of the year honors with her 14th place finish.

She had bad luck at the next race at Texas Motor Speedway, where her car hit the wall and burst into flames; she escaped with bad burns on her hands. She managed two top-10 finishes on the season and ended up 19th in the points.

Di Silvestro’s car crashed and burned again while practicing for the 2011 Indy 500. She crashed again at Milwaukee and missed two races while recovering. She got healthy, but then missed the Sonoma race because of passport problems—apparently a TSA agent didn’t believe she was a race driver. She earned three top-10 finishes but finished 20th in points.

Di Silvestro returned with HVM in 2012, but the team was contracted to use the underpowered, unreliable Lotus engine. Every other Lotus team switched power plants, but HVM couldn’t escape the contract, and di Silvestro had to start each race knowing she couldn’t compete.

Finally, in 2013 things started to improve for the young Swiss driver. She signed a single-year contract with KV Racing in a car using the Chevy engine, and delivered six top-ten finishes in the first 16 races.

After a strong start, she went through a bad stretch starting with Indy, but she and the team pulled together at Pocono, and improved steadily through the next six races.

“I think when I look at the season, I think we started off really well with the 78 car, and then in the middle we kind of had kind of a slump, and later I think the biggest key we did is we just focused on what I needed in the race car,” di Silvestro explained. “We really sat down and kind of tried to get what I wanted in a race car, and the results have been coming, so that’s really nice to have kind of put our heads into it and just kind of do it a little bit our way and that the results are coming. I think it’s great.”

Success couldn’t come at a better time for di Silvestro. With only two races left on the calendar she needs to negotiate a contract for 2014. But that wasn’t on her mind—the next day’s race was.

“Finally we have our podium,” she told NBCSN. “Hopefully tomorrow we can better that.”

The IndyCar Shell and Pennzoil Grand Prix of Houston Part Two will be broadcast on the NBC Sports Network at 1 p.m. ET on Sunday, Oct. 6.