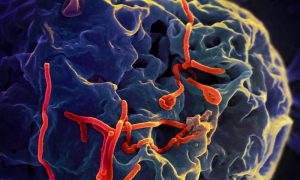 Ebola Outbreak: Where We Are Now and What Happens Next
0
Share Now
TelegramFacebookTweetEmailTellMeWeReddit
Copy Link 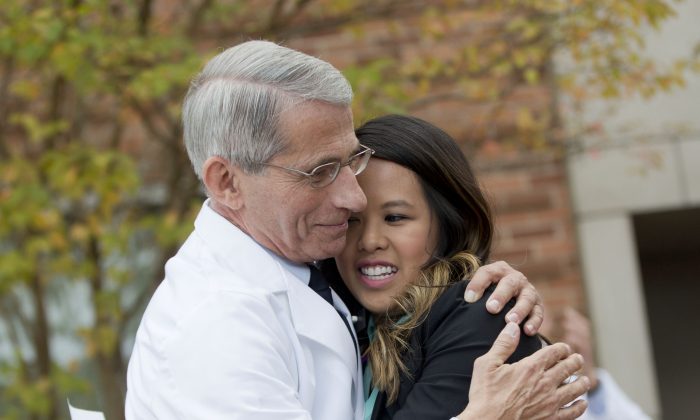 Patient Nina Pham is hugged by Dr. Anthony Fauci, director of the National Institute of Allergy and Infectious Diseases, outside of National Institutes of Health (NIH) in Bethesda, Md., Friday, Oct. 24, 2014. Pham survived Ebola after treatment at the NIH Clinical Center. (AP Photo/Pablo Martinez Monsivais)
US

Should We Still Be Worried About Ebola?

The Ebola outbreak of 2014 overwhelmed hospitals and medical caregivers in the hardest hit countries. It was the worst Ebola outbreak in history. More than 14,000 people fell ill, according to Johns Hopkins Bloomberg School of Public Health, and more than 9,500 people died in Guinea, Liberia, and Sierra Leone.

Now, people there are more vulnerable to other infectious diseases. If another outbreak, such as of measles, should happen there, people in West Africa could suffer another devastating epidemic. The rest of the world could be more vulnerable to imported infections.

“The secondary effects of Ebola—both in childhood infections and other health outcomes—are potentially as devastating in terms of loss of life as the disease itself,” said Justin Lessler, PhD., an assistant professor in the Department of Epidemiology at the Johns Hopkins Bloomberg School of Public Health, in a statement. He coauthored a study on the secondary effects of Ebola published in the March issue of “Science.”

For each month the health care systems in West Africa were overwhelmed by the epidemic, 20,000 children under the age of 5 missed the chance to be vaccinated against measles, the researchers calculated.

They estimated that before the Ebola outbreak 778,000, about 4 percent, of children under 5 in West Africa were not vaccinated against measles. After 18 months of Ebola-related disruptions of the health care system, there are likely to be about 1,129,000 unvaccinated children under 5. It’s a 45 percent increase.

Although we thought Ebola had faded from headlines, it returned when an American health care worker who contracted Ebola while volunteering in a Sierra Leone treatment unit was downgraded to critical condition at the National Institutes of Health (NIH) hospital near Washington, doctors said Monday.

He is the 11th person to be treated for Ebola in the United States. Of those, two died.

“We are intensively treating the patient,” said Dr. Anthony Fauci, director of the National Institute of Allergy and Infectious Diseases at NIH. “He’s in our special clinical studies unit and, hopefully, that will be able to turn this around and the patient will recover, but it’s too early to say.”

The patient was flown in isolation from Sierra Leone on a chartered plane last week and arrived early Friday morning. His name and age have not been released.

The man is a clinician working with Partners in Health, a Boston-based nonprofit organization. The group has been treating patients in Liberia and Sierra Leone since November.

Besides the man at NIH, there are 12 other Partners in Health workers being brought to the United States for monitoring. A Centers for Disease Control and Prevention spokesman said that includes four going to Atlanta to be near Emory University Hospital; one arrived Friday. On Saturday, four health care workers arrived at the Nebraska Medical Center in Omaha; another was expected Monday. Three arrived in the Washington area on Sunday to be near the NIH campus in Bethesda.

One of the patients in Nebraska developed symptoms Sunday night and went into Nebraska Medicine’s Biocontainment Unit. The public is not at risk, because “Those monitoring this individual took all safety precautions when symptoms developed,” said Dr. Phil Smith, M.D., medical director of the biocontainment unit, in a hospital statement. “They all maintained their distance from this person and had no direct contact.”

The health workers who travel and risk themselves to care for people in West Africa are acting to protect everyone.

“Reduced vaccination and the risk of measles and other childhood vaccinations post-Ebola” was supported by a grant from the Bill & Melinda Gates Foundation and by the Department of Homeland Security and the National Institutes of Health.