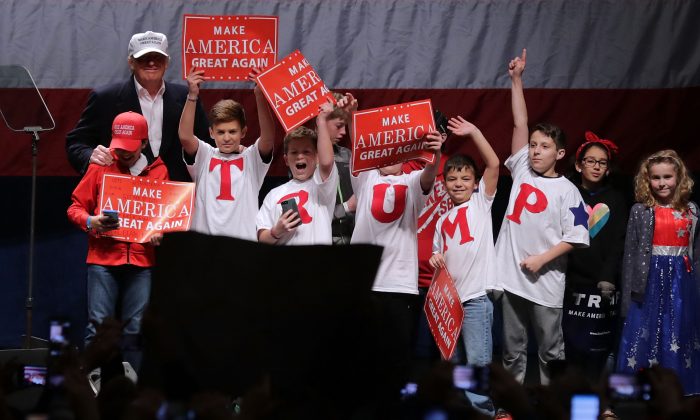 Republican presidential nominee Donald Trump invites a group of children on stage during a campaign rally at the Freedom Hill Amphitheater in Sterling Heights, Michigan on Nov. 6, 2016. With less than 48 hours until Election Day in the United States, Trump and his opponent, Democratic presidential nominee Hillary Clinton, are campaigning in key battleground states that each must win to take the White House. (Chip Somodevilla/Getty Images)
2016 race

A poll of Michigan voters shows that Donald Trump is leading Hillary Clinton by nearly 2 points.

The poll was conducted on Nov. 6 with 1,200 respondents. It has a margin of error of 2.77 percentage points.

The RealClearPolitics average shows Trump at 42.3 percent and Clinton at 47.3 percent in Michigan between Nov. 1 to Nov. 4.

A Fox 2 Detroit/Mitchell poll said Clinton is leading by 5 points in Michigan. That poll was carried out on Nov. 3, surveying 1,007 likely Michigan voters. It has a margin of error of 3.1 points.

On Monday, President Barack Obama appeared at a rally to support Clinton in Ann Arbor, Michigan—possibly in response to the tight polls.

“I know Hillary. She’s somebody who’s dedicated her life to making this country better,” Obama said, according to MLive.com.

According to the Detroit Free Press, Obama added that Trump is “uniquely unqualified” before he seemingly highlighted Michigan’s role as a swing state. “The good news is, Michigan, you are uniquely qualified to make sure he doesn’t hold this job,” he said.

But Donald Trump’s senior communications adviser, Jason Miller, noted that Obama and Democrats are wasting their time in the state. “Here’s where we’re playing offense big league, as Mr. Trump would say it: Michigan. Mr. Trump has been in Michigan today. He’s in Michigan tomorrow,” Miller said to host Matthew Boyle on SiriusXM.

“Matt, if you and I were talking two weeks ago, or a month ago, or a month ago… If one of us said Hillary Clinton, Bill Clinton, and President Obama would all be in Michigan the day before the election, the other person would have said, you’re nuts. You’re absolutely insane. But that is the reality. Bill, Hillary, Obama, and I’m sure all sorts of other cast of characters will be in Michigan” on Nov. 7, Miller said. “Because they’re absolutely freaking out.”