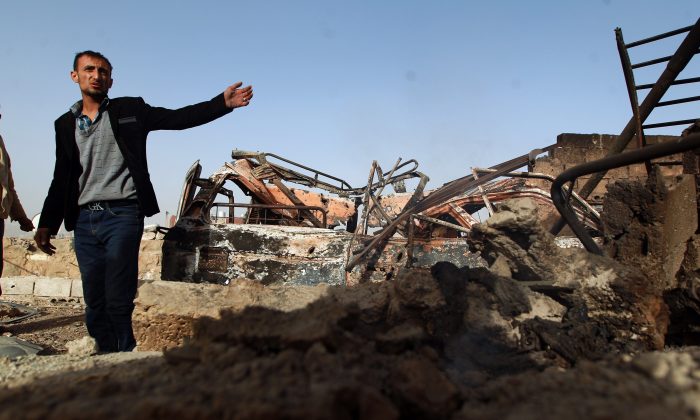 A Yemeni man inspects the damage near the presidential palace in Sanaa on Jan. 20, 2015, following fierce clashes between Huthi militiamen and the presidential guard the previous day. (Mohammed Huwais/AFP/Getty Images)
Middle East

SANAA, Yemen—Shiite rebels shelled the residence of Yemen’s leader and swept into the nearby presidential palace Tuesday in what a top army commander said was an unfolding coup.

President Abed Rabbo Mansour Hadi — an important U.S. ally in the fight against the highly lethal Yemeni branch of al-Qaeda that claimed responsibility for the newspaper-office attack in Paris — was unharmed, authorities said. But his grip on power appeared increasingly precarious.

The Shiite rebels, known as Houthis, took over the capital Sanaa in September as part of a long power struggle with Hadi and effectively govern several other cities as well.

It was unclear whether they intend to seize power altogether or allow the internationally backed president to remain in office.

In a lengthy speech aired by the group’s TV network, rebel leader Abdel-Malek al-Houthi said that “all options are open” and that the escalation “has no ceiling” if Hadi does not speed up implementation of a U.N.-brokered peace deal.

That deal would grant the Houthis greater power over a commission that has been assigned to draft a new constitution and outline a new federal system. Critics of the Houthis say they are using the U.N. deal as a pretext to seize more power.

In Washington, U.S. officials said the rebel violence is undermining American military and intelligence operations against the al-Qaeda branch, which claimed to have carried out the attack on the satirical weekly Charlie Hebdo earlier this month that left 12 people dead in Paris.

Washington has long viewed the Yemeni branch, known as Al-Qaeda in the Arabian Peninsula, as the global terror network’s most dangerous affiliate.

On Tuesday, after an emergency meeting, the U.N. Security Council called for a lasting cease-fire and condemned the violence. In a statement approved by all 15 members, the council asserted that Hadi “is the legitimate authority.”

The Houthis appear determined to redraw a 2012 road map backed by Arab Gulf states and the West that compelled then-President Ali Abdullah Saleh to step down following months of Arab Spring-inspired protests against his three-decade rule.

The Houthis’ expansion into Sunni-dominated areas of the country threatens to inject sectarianism into what until now has been mainly a struggle for power. Al-Qaeda, which is at war with the Houthis and Hadi’s forces, stands to benefit.

A cease-fire took effect by the end of the day following hours of negotiations, but the truce broke down Tuesday afternoon when Hadi’s residence came under heavy shelling, according to Yemeni officials.

Information Minister Nadia al-Sakkaf posted on her Twitter account that armed forces positioned on rooftops began bombarding the president’s house. Hadi was inside the heavily guarded residence at the time but was not harmed, officials said.

At the same time, Houthi rebels swept into the presidential palace, raiding offices and looting arms depots, according to Col. Saleh al-Jamalani, commander of the force that guards the palace.

“This is a coup. There is no other word to describe what is happening but a coup,” al-Jamalani told The Associated Press, adding that the rebels were probably aided by insiders.

Presenting a starkly different narrative, the Houthis’ TV network al-Maseira claimed the rebels intercepted and foiled attempts by an unspecified group to loot weapons from the palace.

In his speech, Houthi heaped scorn on Hadi and the Islamist Islah party. He said Hadi’s rule had empowered al-Qaeda’s local branch and allowed corruption to spread, saying reforms require the full integration of the Houthis into the state.

Critics of the Houthis have long warned that they intend to grab power, despite the group’s insistence it wants to work with its political rivals.

“What is happening now is just one more step toward consolidation of power,” said Abdel-Bari Taher, a veteran Yemeni journalist.

Political analyst Maged al-Mahjai said the Houthis’ assurances were meaningless in the wake of the violence, which he said would encourage the disintegration of the state.

“Sanaa has fallen completely, and Houthi is the master,” he said.

He added that Hadi has effectively lost all power and that his only options are to “become a puppet or withdraw from the scene.”

The main dispute between Hadi and the Houthis concerns the makeup of the 85-member commission that will draw up a new federal arrangement. Hadi has yet to appoint new members, which was one component of the U.N.-brokered peace deal.

The Houthis accuse Hadi of violating that deal by calling the current members of the commission to a meeting days ago. The rebels retaliated by abducting his top aide.

From The Associated Press. AP writers Maggie Michael and Sarah El Deeb contributed to this report from Cairo.