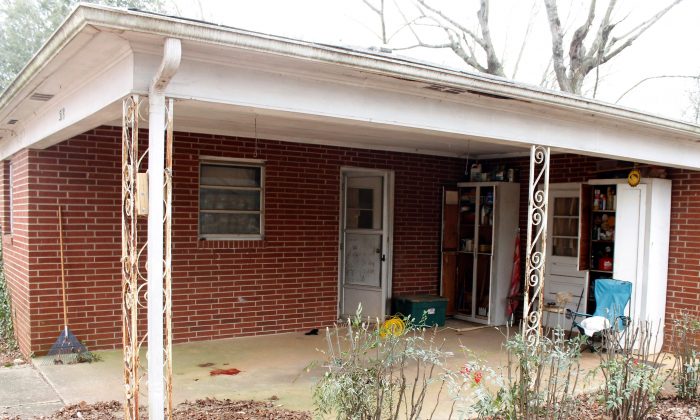 The carport of a home in Statesville, N.C., is pictured on Wednesday, Jan. 20, 2016, where a man was shot and killed by sheriff's deputies the day before. The Iredell County sheriff's deputies were trying to serve an eviction notice on Samuel Edward Grady, 55,, when investigators say he lunged at the deputies with a large knife. (AP Photo/Skip Foreman)
Crime and Incidents

STATESVILLE, N.C.—North Carolina investigators found a possible explosive device in the home where sheriff’s deputies shot and killed a man during a confrontation in Statesville, a sheriff said Wednesday.

State Bureau of Investigation agents found the device Tuesday night as they went into the home where deputies had tried to serve an eviction notice, Iredell County Sheriff Darren Campbell said in a news release.

“It was a small item that could potentially … I’m sure it could have damaged something,” Campbell told reporters during a news briefing following the statement’s release. “Not a big item, but something that they were concerned about enough to contact their bomb disposal unit and have their experts look at it. “

A bomb disposal unit handled the device without incident.

Samuel Edward Grady, 55, confronted two deputies with a large knife, the sheriff said. A third deputy arrived, and officers reported that shots were fired. Campbell said previously that the man lunged at the officers.

There was no indication Grady had a prior criminal record, according to a search of a courts database and a Department of Corrections online search.

The door to the carport was missing a window pane, and there was a blood stain on the carport floor where the confrontation between Grady and the officers took place.

Campbell says it appears his officers followed proper policies and procedures, and they have been placed on administrative leave with pay during an internal investigation. Spokesman Randy Cass said it was the first shooting involving a department deputy since 2007, which also ended with a suspect being killed.

Deputy John Fletcher has 14 years of law enforcement experience. Deputy Reggie Allen has 16 years of service. Deputy Roger Vargas has about three years of experience. Campbell said none of the deputies had ever been involved in a shooting.

“Any time you’re put in this situation, you’re going to be upset,” Campbell said. “No deputy gets up in the morning and wants this to happen.”

“Sammy was quiet, stayed mostly to himself,” Aldridge said. “If you’d see him in the yard, he spoke.”

Aldridge said other neighbors had tried to help Grady with his yard or his house, but he rejected their efforts.

The State Bureau of Investigation is looking into any criminal activity at the home, the sheriff said.