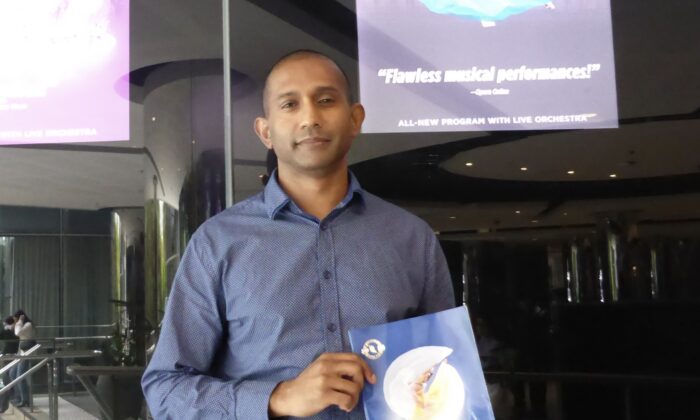 The repertoire of story-based classical and folk dances and music illustrates the true beauty of China’s five millennia traditional culture.

Storytelling is an integral part of this ancient civilization, and many of the dances portray an important message passed down by heavenly beings to earthly mortals.

Mr. Perera felt they were powerful messages about the importance of living a life based on moral values.

“And I think [that is] missing in the world today. So, I think it was very important that they can bring that forward,” he said.

“I think [the performance] really brings people out of the mundane life and the chaos of what we hear and see around us. And this really brought me back to what it’s all about—the beauty, the compassion, the images of the Buddha and the divine beings and dancing itself,” he said.

The performance showed something that cannot be experienced in everyday life because man lives in chaos, said Mr. Perera.

He felt a connection with Shen Yun and said that, as the dancers moved, something beautiful was emanating from the stage.

“It’s a really blessed experience, and I think people who see [Shen Yun] are quite fortunate.”

He was also impressed by the dance that portrayed the persecution of a Falun Dafa disciple. It carried a message about virtue and goodness, he said.

Falun Dafa is a practice whose spiritual teachings are based on truthfulness, compassion and tolerance. Unfortunately, practitioners have been persecuted by the communist regime for over 20 years.

“I think the main message here [is] that we return to the divine,” said Perera.

He was also touched by the dance, “The Display of Great Compassion,” a mini-drama where society has rejected traditional values and become obsessed with modern technology.

“When I see people, they’re stuck on their phones, and they’re not relating, and [the dancers] really captured that. That’s so beautiful. Every movement … was so precise. When you [look] closely … you see how skilled they are in capturing the whole environment,” said Mr. Perera.

Society’s obsession with mobile phones contrasted with the beauty of ancient Chinese culture, he said.

“So, you could really see … how important it is to go back to that beauty and goodness …  instead of being trapped on your mobile phone and the darkness,” said Mr. Perera.

Shen Yun’s mission is to bring back China’s traditional culture as it was prior to the communist era.

Mr. Perera said that in his native country, Sri Lanka, traditions had also been lost.

Through dance, Shen Yun shows the profoundness of Chinese culture.

Everything was based on something so beautiful, so virtuous.
— Tim Perera

“Everything was based on something so beautiful, so virtuous. And where is it now? You look around, and you feel so lost,” said Mr. Perera.

Perera noticed that theatregoers were smiling at him as they left the theatre at the end of the performance.

“I just love the dancers; they’re so amazing …  their spark of light [was] kind of delivered to me and the people around me,” said Mr. Perera.