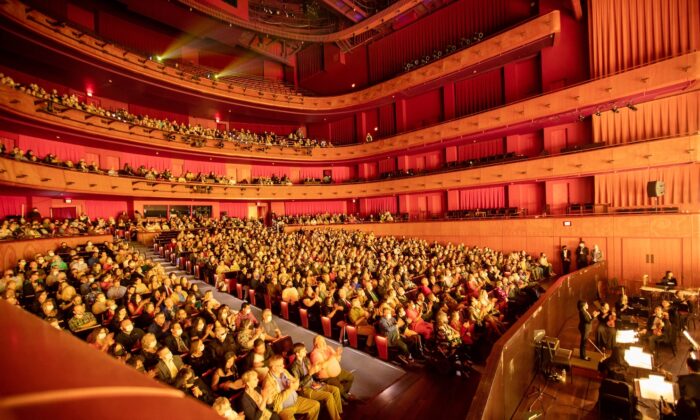 SAN ANTONIO, Texas.—The pageantry of Shen Yun Performing Arts often evokes emotions from audience members that they were not expecting to feel. David Slyman, a retired military officer, and Kristina Slyman shared how the performance touched their hearts.

“The opening was so beautiful I thought, I can’t cry, it’s so beautiful! It makes me want to cry. The art is so extraordinary. You can see the sincerity and the joy of the performers, and it’s just too beautiful for words,” Mr. Slyman said.

“This is our second [seeing] Shen Yun and it’s simply too beautiful for words. If I had to choose some words, I would say, it’s exquisite, extraordinary, and exhilarating,” he added.

New York-based Shen Yun’s mission is to revive China’s 5000 years of civilization. The company was established in 2006 by artists around the world who shared the dream to use their skills to fulfill that mission.

This show goes a long way towards bringing Chinese culture and the audiences around the world together.
— David Slyman

“I see the civilization—I see the respect for civilization through Shen Yun, and I hope that one day China, instead of being an enemy, will appreciate its history and its past and be a friend of the United States. And this show goes a long way towards bringing Chinese culture and the audiences around the world together,” said Mr. Slyman.

As someone who worked in the army, Mr. Slyman shared his dislike for conflict amongst nations. He felt that Shen Yun shows “there’s good people on both sides of the ocean and that this production will help bring these countries together.”

The idea of a better future also resonated with Ms. Slyman.

“Believe in God. And as David said, ‘hope.’ And there is always something much more powerful somewhere over there than it is over here with us. So it’s in our hope, our belief, and the power of God,” she shared.

The artists of Shen Yun are trained in classical Chinese dance. The art form has thousands of years of history and is actually the root of many other art forms that we know today, such as gymnastics and acrobatics.

“You have to be a world-class dancer and a musician just to be a part of the Shen Yun production. So when you have all these extremely talented people together—the director, the choreographer, the conductor—of course, it’s going to be a magnificent performance!” Mr. Slyman commented.

These dancers—you can see the passion in the performance, the smiles on their faces—that energy is broadcast into the audience.
— David Slyman

“These dancers—you can see the passion in the performance, the smiles on their faces—that energy is broadcast into the audience,” he added.

Shen Yun’s live orchestra is comprised of a classic Western orchestra as the basis while using traditional Chinese instruments like the erhu and pipa to give the music an additional flair.

“I love Chinese music. I love the fact that you use authentic Chinese instruments to make it that much more realistic,” Mr. Slyman complimented.