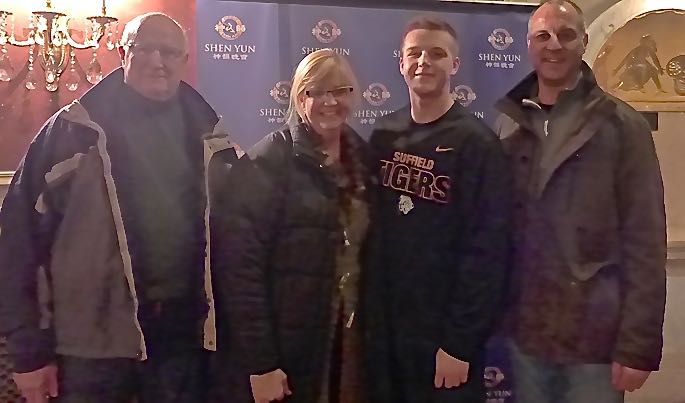 Ms. Smith, along with her husband, son, and father, at the Shen Yun Performing Arts performance staged at the Palace Theater on Feb. 8, 2015. (Pamel Tsai/Epoch Times)
Shen Yun

WATERBURY, Conn.—Ms. Smith, a top-level executive with a major international toy company, left the Palace Theater in good humor after a Shen Yun performance on Feb. 8.

“It was visually extremely beautiful,” Ms. Smith said. “It was charming with a lot of humor.”

Ms. Smith said she was particularly amused by the piece “Monkey King and the Skeleton Demon”, which tells a story from the Chinese classical novel Journey to the West about a Buddhist monk accompanied by the Monkey King, Friar Sand, and an awakened pig on an epic journey to bring Buddhist sutras from India to China.

Ms. Smith said she came to the show because she was interested in learning about Chinese culture. “It’s interesting to see these stories,” she said.

Shen Yun has several story-based dances that portray stories from Chinese history and culture, from ancient legends to modern day China. The tales often embody a moral message that has inspired generations of Chinese people—from the filial tales of heroine Mulan to the courage of general Yue Fei.

“The interaction between the screen and the stage…was amazing with that technology,” Ms. Smith said.

“I just found it visually stunning. I really loved the colors, it was very dramatic,” said Todd Warner, a financial advisor at Canoga Wealth Management LLC who attended the show with Ms. Smith.

Passed down from imperial courts and ancient plays, classical Chinese dance has a history of 5,000 years.

Classical Chinese dance is a richly expressive art form, and has many challenging flips and spins.

“Choreography was very wonderful,” Mr. Warner said. “The expressions of all the performers were fantastic.”

“It was phenomenal,” said Richard Smith, who also attended the show with Ms. Smith and Mr. Warner. “The colors, the choreography, the dancers were unbelievable.”

“It’s been around for so many generations,” Mr. Smith said. “It’s sad to hear that it can’t be done in China.”

Shen Yun cannot be seen in China today, where traditional culture has been nearly lost after the Cultural Revolution from 1966-1976.

Since then Shen Yun, a non-profit organization, has become an international phenomenon.