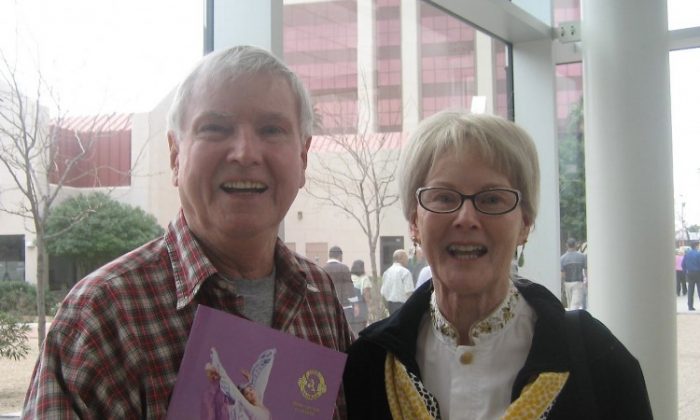 “I love the music,” said Mr. Scott. “I love all the dancing. The dancing is fantastic, and I really liked the costumes. The costumes were so vibrant.”

New York-based Shen Yun was founded in 2006 with the mission “to revive the true, divinely inspired culture of China and share it with the world” through music and dance, according to the company’s website.

“Completely independent of the Chinese regime, Shen Yun enjoys the artistic freedom of New York, enabling it to now bring these ancient traditions to the stage. Shen Yun and its mission have drawn top talent from around the world; many artists are winners of international competitions in dance, choreography, and music.”

Mr. Scott was struck by the grace and beauty of Shen Yun’s female dancers. “I especially liked the female dancers, because they were so light on their feet. The movement was great, the little short steps. Very exhilarating, because I can’t move like that anymore.”

The digitally projected interactive backdrops, where dancers actually appear to go in and out of the screen, were very enjoyable to Mr. Scott. “They were so unique,” he said. “I’ve never seen anything like that before.”

Mr. Scott said he has always been interested in Chinese culture and has wanted to go to China for a long time. He said seeing Shen Yun made him want to go even more, but he said since he’s now 80 years old, it might be difficult.

Mrs. Scott said she also really enjoyed the performance. “The costumes were wonderful,” she said. “They were colorful, and it was so uplifting and beautiful. I really enjoyed it.”

As a Tai Chi instructor, Mrs. Scott said she has studied Chinese history extensively, which added to her enjoyment of the performance.

She said she hadn’t been aware of the persecution of the spiritual group Falun Gong currently happening in China, which Shen Yun addressed. “There is persecution of religion of China now,” she said. “I think that’s what [Shen Yun] was trying to tell us, in such a beautiful way.”

“That was really emotional,” Mrs. Scott said, with tears in her eyes. She said she hoped Chinese people and everyone worldwide could have freedom of religion.