Shen Yun Takes Artist ‘Up, Up, Up, to Heaven’ 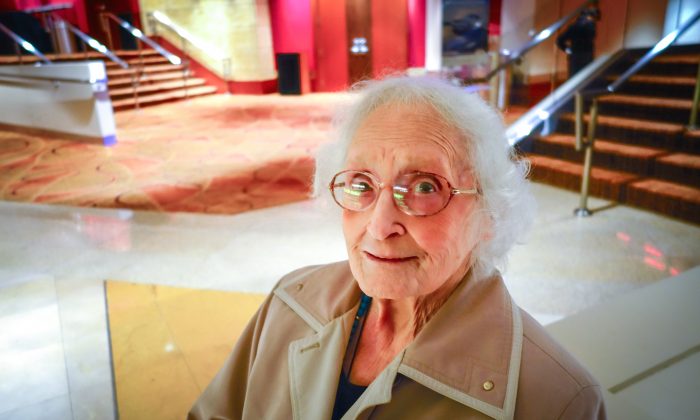 ATLANTA—Wearing a beige coat, Mrs. Lila Stennett was sitting on a red cushion with hands folded in her lap, looking content. The painter, originally from Mississippi, was waiting for her daughter to bring the car around, after opening night of Shen Yun Performing Arts at the Cobb Energy Center.

“My daughter is the one who brought me for my birthday,” said Mrs. Stennett. Coming to the performance was an 89th birthday gift from her daughter.

Mrs. Stennett said the experience felt as if she was flying. “I felt like I was going to go up, up, up, to heaven, it was so beautiful.”

The keenest joy of the experience for her had to do with color. “I’m thinking of color, when the blue came out,” she said, searching through her impressions of the evening.

At the beginning of the second half, “Fairies of the Sea,” portrays delicate fairy maidens, “dancing with long silk fans like rippling waves, and soft blue skirts swirling to the rhythm of the cerulean waters,” according to the program book.

“That somehow got inside,” said Mrs. Stennett, with a longing expression.

“I would recommend it to anyone. Of course, everybody doesn’t love color and all that like I do. You see, I paint,” she said. “I’m an artist.”

All the visual intricacies of the performance intrigued her. She said “anybody who has had any training in color, in perspective” would have to be astounded by the digitally projected backdrop. She said she would not know how to talk about it to anyone without an art background.

Mrs. Stennett raised her hands and said: “The background, they way they brought people in, and got rid of people! It took a lot of engineering, I think. It was all fascinating.”

“Inspired by 5,000 years of history, these spectacular landscapes truly reflect China’s multifaceted geography, society, regions, and dynasties. Some scenes even transcend this world, entering a heavenly palace where fairies dance amidst mystical clouds or peering into the solemn majesty of a Buddhist paradise,” says the Shen Yun website.

Ooohh it’s so beautiful. You can’t tell how beautiful it is.
— Lila Stennett

Mrs. Stennett said she was glad she left the country outside of Jackson, Mississippi and came to Atlanta, to have a chance to see Shen Yun. “Ooohh it’s so beautiful. You can’t tell how beautiful it is. There aren’t any words to describe it.”