Shen Yun Shows That Art Is More Powerful Than Guns 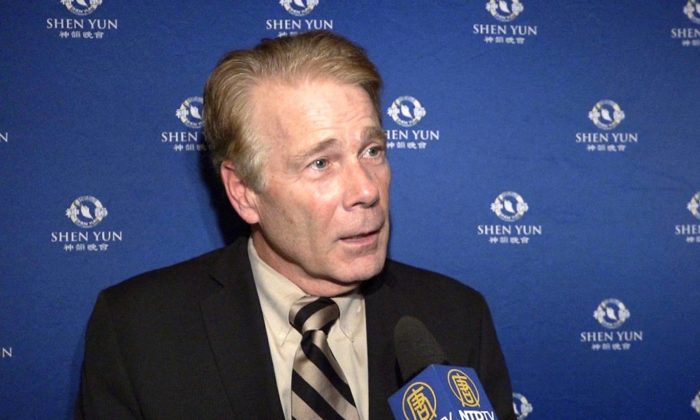 BALTIMORE—Within the colorful splendor and artistry of Shen Yun Performing Arts are stories of courage that have never been told about China’s current regime, a regime that has sought to destroy the 5,000-year-old traditional culture with deep spiritual roots.

“Whenever people are oppressed anywhere in the world, art is one of the first vehicles to rebel against that oppression, and art can do what guns and bombs can’t do, many times. Art can make a more powerful argument for freedom than armies can,” said Mr. Stephenson. One example of this in the performance was a story based dance called “Monks and the Red Guards.”

In the late 1960s, when the Chinese Communist Party launched the Cultural Revolution, young people were forced to join the Red Guards and go around the country burning books and razing temples. In this dance story, the Red Guards try to drive out the monks in a monastery but they soon discover that the use of sheer force is futile, because the monks possess supernatural martial arts skills.

“It’s all very, very touching, but the most touching one was the vignette with the Red Guard, and you see this man being beaten down, but you see ultimately his faith transforms him and he recovers, and he’s never lost his faith—that, to me, was extraordinarily compelling.”

It was the first time Stephenson had seen Shen Yun, upon recommendations from a good friend who had seen it before.

“I love it. It’s just thrilling; it’s beautiful,” he said adding, “To me it’s fascinating from an aesthetic point of view—the art, the choreography, the visuals, the dances, beautiful and very compelling, but the story behind it is what makes it, I think, really fabulous.”

He found the idea of compressing 5,000 years of Chinese history on stage with “such wonderful dancers” an experience which he hopes to repeat when Shen Yun tours next season.

Shen Yun Performing Arts is the eminent classical Chinese dance company, celebrating 10 years since it was founded in New York with the mission to revive China’s divine culture.

“The fact that this cannot be seen in China where it originates from is a tragedy to me personally,” said Mr. Stephenson.

Shen Yun Takes You Back to Your Roots, Said CEO of Cybersecurity Company

For founder and CEO of a cybersecurity and system development company Ramon Esquilin, the pressures of the job are as far as one can get from spirituality, and by his own admission, “we have been moving so far with the technology, … we sometimes forget about the pride and that connection with the divine,” he said.

Mr. Esquilin enjoyed how Shen Yun “takes you back to find that little piece the divinity, find that part of the roots,” he said.

He attended Shen Yun in Baltimore on Feb. 9 with his wife Tilmary Esquilin, son Jonathan Esquilin, and friend Wisselly Nevse, who all enjoyed the performance and were looking forward to seeing it again.

“Never forget where you come from, all those amazing things, spiritual things,” is the message that Mrs. Esquilin took to heart, “so that is, for me, why I like it. And, definitely, I am coming back,” she said.

Young Jonathan, declared “It was amazing! I loved the whole show and I love everything,” he said pointing out that he also loved the program book so that he could read all about the performances. “I really loved it and I hope to see it again.”

Shen Yun Performing Arts has become an international phenomenon by bringing the wonders of ancient Chinese culture to millions across the globe. The stories have proven to resonate with audiences all around the world irrespective of age and cultural background.

Family friend Ms. Wisselly echoed the same sentiments as the Esquilin family and many others by saying “I love it because it definitely shows you how to choose between the good and the bad. It is like a connection with our souls, and of course the divine, so it is amazing, I really love it.”